The 2018 elections season has been kicked off with elections in three northeastern states. The players include national parties like BJP, Congress, Left and regional parties. Though stakes are not high for some like BJP but for Left and Congress the fight is for survival. The northeast has always been a bastion of Congress with Tripura being a fort of Left. Let’s look at 2018 assembly election results and understand its meaning for all parties.

In the morning, all the elections have been glued to their Television screens watching the results. As the sun sets, we are left with the results of the analysis. For winning parties, it will be a night for celebration. For the loser a night of contemplating. So let’s look at how the results have played out-

Nagaland has seen a turbulent 5 years. They have had 5 chief ministers in as many years along with president rule in between. The political parties in the state were hesitant to even to fight the elections because of issues relating to the insurgency. On the day of voting also a couple of attacks happened. The people of the state though still came out and voted with 75% voter turnout.

The results have been not too surprising.  The ruling party of Naga Peoples Front (NPF) secured 27 seats, to become the single largest party in the state. It is followed by Nationalist Democratic Progressive Party (NDPP) securing 15 and its ally BJP 11 seats respectively. The rest of the seats were divided between Independent, JD(U) and National People’s Front.

Read more: All You Need To Know About Tripura, Nagaland And Meghalaya Elections Before Counting Begins

The elections were particularly interesting because the ruling parties NPF and BJP fighting elections separately. BJP formed a pre-poll alliance with newly formed NDPP, while just before counting NPF submitted a declaration of alliance with JD (U) and NPP.  Though both the parties are allied in National Democratic Alliance (NDA) they fought against each other in the election. The same goes for JD (U), who is fighting BJP in the state despite being in partnership In Bihar.

Who will form the government in Nagaland?

So, as the seat arrangement stands now, NPF can form the government with the help of JD(U), NPP and independent(27+1+2+1=31). From the looks of it, this could be how the government will be formed. Interestingly Kiren Rijiju, Union Minister and BJP in-charge of Nagaland has said that BJP will form the government in the state. Indicating that BJP could have formed an alliance with NPF after the elections. For confirmation, we would have to wait, but the results have clearly made BJP a force in Nagaland as well.

The loser from this election is the Congress, who is just not in the picture this time. At least in previous elections, they were a force to reckon. This election they have just gone in the background with nothing to show for its efforts. They have gone from 8 seats to none.

BJP can now claim that they have been successful at least in their effort of Congress mukt Nagaland. 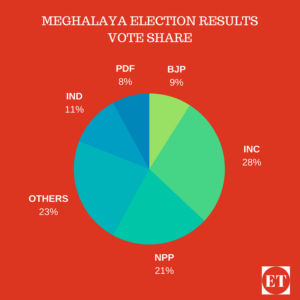 The election of the Meghalaya was the war of two national Parties, Congress and BJP. Both the parties giving they’re all in the fight to win the state. While Congress is looking for retaining their last fort in Northeast, BJP is looking for gaining a foothold. Congress had fielded their CM candidate Mukul Sangma as their main face. Implementing a strategy that has worked well for them in Punjab. BJP, on the other hand, was looking for gaining more support in the state where they had only 1% vote share in previous elections.

The People of the state have given their verdict, a hung assembly. The elections were seen as two-horse race Congress vs BJP. The results though have thrown open the battle.

Congress has emerged as the biggest party with 21 seats but well short of 31 seats needed for a majority. BJP on other hand has won just 2 seats from 47 that they contested. The real winners are the small regional Parties. Biggest of them all is National Peoples Party(NPP) with 19 seats. They are also the second biggest party overall. Though they are in alliance with BJP in Manipur they contested the elections alone and have performed well. The other potential kingmaker parties are Nationalist Congress Party with 1 seat, Hill State People’s Democratic Party with 2 seats, United Democratic Party with 6, Khun Hynniewtrep National Awakening Movement with 1 and People’s Democratic Front with 4 seats to show for.

All these small regional parties have 14 seats with them and Independents have 3 more seats. This makes 17 seats that could potentially make the government whichever way they move.

Who will make the government in Meghalaya?

Though Congress is the front-runner to form the government, they are nervous and cautious this time. The nervousness comes from the fact that NPP and BJP cunts for 21 seat, same as them. They are already allies in Manipur and most certainly will form one this time also. The race becomes more interesting if you consider post-election scenarios of Goa and Manipur. Both the states had Congress as the front-runner but BJP formed the government by forming allies with smaller parties.

The Congress this time though has started acting already.  Senior leaders Kamalnath and Ahmed Patel have already taken the charge of the situation. BJP is also not behind. They have sent Himanta Biswa Sarma for talks. Himanta Biswa Sarma was there when BJP formed the government in Manipur as well.

The election results may be out in the state of Meghalaya but the fight to form the government looks like is just beginning.

The state of Tripura was ruled by Manik Sarkar for the past 25 years. Making him one of the longest-serving Chief ministers in the history of independent India. Behind only his own party leader Jyoti Basu. The state is also one of the last state ruled by the Left party, Communist Party of India (Marxist). In the run-up to the elections, the fight was put between ideologies and not the parties. As both the major parties, BJP and CPI(M) represents the two extremes of political ideology in the country.

From the morning the BJP was seen as the leader of the pact, with early leads. In the afternoon the difference started to widen, with BJP starting with their celebrations. In the evening as CPI (M) conceded its defeat the gap was just too wide to call it a competition.

BJP has won 35 seats out of 60 seats, giving them a clear majority without the help of their ally. BJP had entered a pre-poll alliance with Indigenous People’s Front Of Tripura(IPFT). Interestingly IPFT has also on 8 seats by themselves. Taking the tally of the alliance to 43 out of 60.  CPI (M) has been reduced to 16 seats.

Though BJP now can form government single-handedly they will include their ally in the government according to party President Amit Shah.

From the looks of the result, Oppositions have work cut out for elections in 2018 and 2019. BJP and PM Modi have now expanded their foothold even in the northeast and is not slowing down. Congress on their own has to now look deep inside and make changes if they want to win elections. Though they are still in contention to make government in Meghalaya, they have not won it.

If we were to look experiences of the hung assembly results in recent past, Congress has lost the chance to form a government in latest two. In Meghalaya, the race has just begun to form the government, and Congress needs to win it. If BJP forms the government, then it will demoralize the cadre of Congress in all other states.

They also need to take lessons from this election. Congress will now to work harder in Karnataka which is the next state they will look to retain. If they lose that then only Punjab will remain with them.

For CPI(M) the loss in the Tripura is a defeat they need to look closely. They were the ruling party in a state considered an unbreakable bastion of red. CPI(M) has now lost all major elections post-2014, with exception of Kerala. They are also now reduced to only Kerala. The once most dominant force of east has now no states in the east. They have lost West Bengal to TMC and now Tripura to BJP. They must now look for other strategies, as they had tried the ideology strategy in Tripura and lost badly. Maybe they now need to look for grand alliances with other left parties along with anti-BJP parties.

Has BJP become an invincible force?

For BJP and PM Modi elections results could not have come at better time. They were on back foot after losing all three by polls and a close call in Gujarat. They have now won Tripura a bastion of left, are looking to form the government in Nagaland and could spoil the Congress’s party in Meghalaya as well. The results also come just a day after India’s GDP growth once again touched the 7% mark. Making India fasted growing economy.

For BJP as a party, they are now in 21 states of 29 in India. This means that they are now in power in more than 2/3 of the states. A feat that not even Congress reached in its prime days. They are also looking to form one in Meghalaya and in next elections Karnataka. If they win both they will be in power in 23 states, leaving just six states. More importantly, if they win in both of these states, Congress will be left with just one state.

These three election results certainly do one thing for sure. They make Congress and Opposition feel nervous about Congress and possibly Left Mukt Bharat.