2021 Assam Legislative Assembly Election : EVERYTHING YOU NEED TO KNOW ABOUT

2021 Assam Legislative Assembly Election : EVERYTHING YOU NEED TO KNOW ABOUT

Legislative Assembly Elections are scheduled to be held in Assam in the month of April 2021. This Indian state of Assam It is a unicameral legislature and the voting system is First past the Post. The House is located in Dispur, being the capital of Assam.

There are 126 seats in the Legislative Assembly out of which 64 members elected from single-seat constituencies is needed to win a majority. Its term is five years unless it’s dissolved.

Last elections was held from 4th-11th April 2016. Bharatiya Janata Party (BJP) won majority and Sarbananda Sonowal was made the chief minister since 24th May 2016. 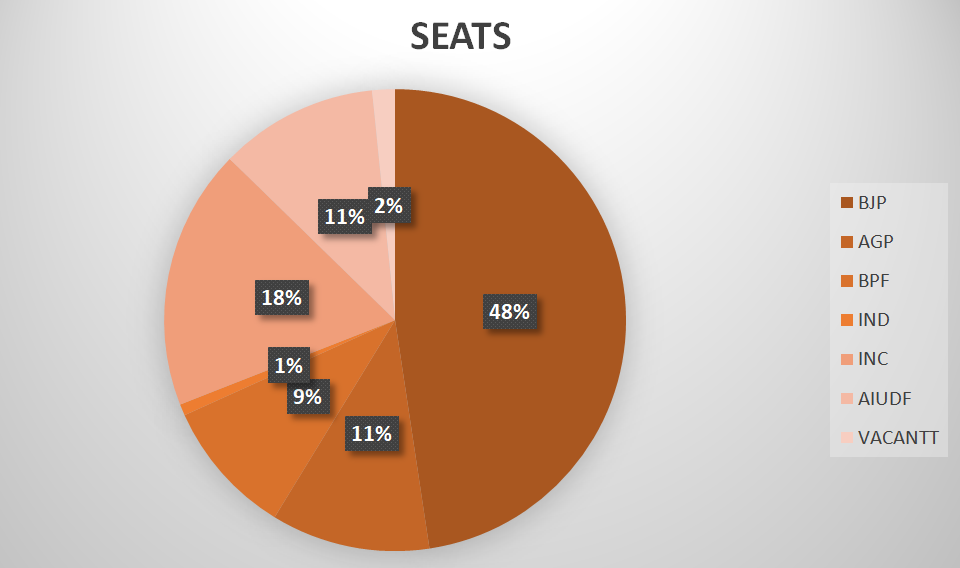 In the year 2019, BJP won 9 out of 14 seats while Congress came down to only 3 seats in the Lok Sabha polls. Tarun Gogoi led Congress government had been winning three consecutive Assembly elections since 2001 since this happened. A high vote share of the Congress and separation of opposition votes has always favoured the Congress.

The Modi fan base  along with the promises of employing 25 lakh youth were in hype before this election. The image of Sarbananda Sonowal as the ‘jatiya-nayak’  with a promise of removing illegal immigrants had been the major reasons for this win.

The assembly elections of 2016 were held in two phases with 65 seats and 61 seats respectively. While the first phase of the election covered largely the constituencies of upper Assam and Barak Valley, the second phase of elections was held primarily for the lower Assam assembly seats. The BJP, AGP and Bodo Peoples’ Front (BPF) fought on a common platform under NDA (National Democratic Alliance) whereas the Congress had an alliance with the United People’s Party (UPP) in the BTAD

Also Read -   What is the Strategy of Congress for Karnataka Polls?

Winning over Upper Assam is an obvious ticket to win elections. This has been proved time and time again in the history. There are 42 seats from Koliabor to Sadiya. This is a trend in the politics of Assam Elections. Congress used to have a hold of it (30 seats) but in the 2016 elections and Congress splitting up from AIUDF to not miss it’s Hindu voters but it backfired and shifted its vote. Half of BJP’s winning seats were from here leaving Congress with only 6 seats.

A serious mission of achieving 80 seats out of 126 seats has been set by Tarun Gogoi, the Congress leader or Assam. His main strategy being working towards gaining back The lost constituencies in the past elections and winning them back. He has talked about wanting to explore the problems of the rural area by taking leadership from the front . Assam has a strong grassroot booth system and hence paying attention to the rural areas could help Congress get back. Building a structure and improving grassroot level attention is in their plan book.

Congress had done a lot of developments during it’s 15 years of governance and started up a lot of of projects that BJP finished. The Bodoland Peace Accord was initiated by Congress back in 2003 amongst the Bodos and non-Bodos.

A Hundred by BJP:

After the 2019 Lok Sabha polls being a success, Himanta Biswa Sarma and State BJP President Ranjit Kumar Das had announced its “Mission 100” for Assam with a plan of having at  least 100 of the 126 Assembly seats in 2021 elections.

For the past five years, The RSS has worked hard for the backward areas and gained the sympathy and the votes for BJP.

According to the possibilities and probabilities of MLA’s winning in their constituencies, a report has been prepared where  twenty plus existing BJP MLA’s may not get the ticket. CM Sarbananda Sonowal and finance minister Dr Himanta Biswa Sarma has been planning 20 new faces for the upcoming Assam assembly elections of 2021 to meet its mission 100 goal and asks AGP AND BPF (alliance groups) to do the same.. This is because the leadership of MLAs have failed to maintain enough public trust and base to retain their seats again.

During the coronavirus pandemic crisis, The BJP finance minister has actively worked and spent on keeping it under control which has gained a lot of public appreciation.

What the biggest concern underlying BJP’s win in 2021?

The ongoing protests and distaste against the Citizenship Amendment Act(2019) has been a conflict for the BJP ruling party in Assam. BJP has been severely trashed by the CAA protests. BJP had promised that by May 16th , the illegal immigrants would be deported from this country and this hasn’t been fulfilled which raged and lit a lot of depredation. A lot of other unfulfilled promises could also affect the results this coming election.