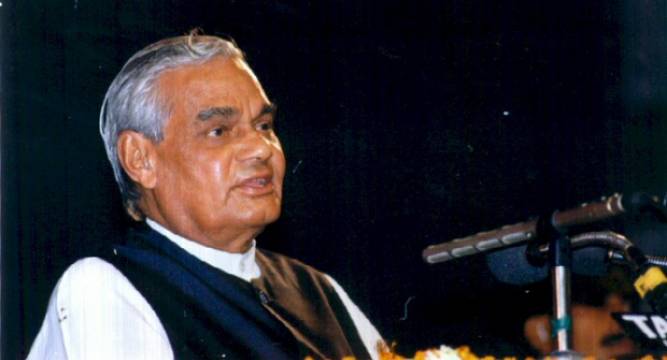 Atal Bihari Vajpayee the first non-Congress Prime Minister to complete a full term, passed away recently leaving behind a legacy of reforms and initiatives. But what the common man cannot forget easily was Vajpayee’s oration. His words had a lasting impact on every ear they fell on. His powerful speeches and poems had the ability to move masses to action. He had a great command over the Hindi language which aided his public speaking. Here is a list of 7 best speeches of Atal Bihari Vajpayee which will make you why he is all time most favourite politician.

This speech was made when Vajpayee was in office the first time around in 1996 leading a coalition government but just for 13 days as then a trust motion was moved in parliament which his coalition government lost by one vote (at that time his party was seen as untouchable because of its views and aligning with it was thought as suicidal). A rightly outraged and angry Atal made this speech after being blocked by an opportunistic opposition. It was telecast live on Doordarshan for the whole country to see as Vajpayee delivered a message before handing over his resignation to great hue in the assembly.

This speech is of significant importance as it was the first speech made by a national leader in the United Nations general assembly in Hindi. He was then the foreign minister in the Janta Party experiment of 1997 with Morarji Desai as the Prime Minister. Other national leaders had always opted for English while making speeches but Vajpayee who was also fluent in English chose to put forward his message in the Hindi at the international organisation. He talked of how the Janta government was just 6 months old but now Indians didn’t have to fear for their fundamental rights, subtly taunting Indira Gandhi era emergency. This way of incorporating jibes and humour into his speeches was much loved by all as a way to break the monotony

One of the first things Atal did, when he came to office with a majority in 1998 under NDA, was to okay the Pokhran phase 2 nuclear tests to remove all doubts regarding India’s nuclear capability with the threat of China looming large on its head.

While the international community headed by the west and at home the opposition was questioning his bold decision came this speech in the assembly. He struck down the rumour that this decision was made due to international pressure. He points out that the tendency to prepare just before the test was a faulty one and reiterated the logic of nuclear deterrence.

He sought to placate fears by promising no first use.

4 – Atal Bihari Vajpayee in a Joint Session of the U.S. Congress

The USA congress had the honour of reciprocation when Vajpayee went to the USA in 2000 after Clinton’s visit in March that year to India. He portrayed the visit as a new step taken towards newly formed and strengthening ties after years of a pro-Pakistan stance of USA and historic friendship with Russia of India due to the effects of the cold war. He spoke about the Indian diaspora in the USA and how their skills, enterprise, knowledge aid USA in several ways linking it to show what the USA and India can achieve together. The USA had become a great nation due to welcoming outsiders on its shores. He praised how Indian economy grew with a special focus on the IT sector to showcase achievements to the USA and try to forge deeper economic and political ties.

An unfulfilled desire of Atal was to be able to forge peace in the Kashmir valley that was on its way to electoral competition in 2002. Doubts regarding the fairness of this election (as has previously been questioned due to regular instability) were addressed by Prime Minister Vajpayee from the ramparts of Red Fort in his Independence-day speech. He fleetingly even mentioned the case of communal disharmony in Gujrat that happened under his watch as PM and when Narendra Modi was CM.

Like all good leaders and like all good orators Vajpayee’s public rallies for lobbying the masses were itself packed with power and purpose. A speech he gave back in 1980 where he lays bare that the problems of governance are the reason for the breakdown of institutions- financial and political- not a party or an ideology. A much loved and praised speech that had left a lingering question in the minds of all.

Vajpayee was as effective an orator in the opposition also. He could turn the defensive streak into offensive simply as his articulation of the point was great. His belief in ethical politics which he put forward in an earlier Lok Sabha speech is showcased here. His speech in Lok Sabha attacking the fodder scam under the government of Lalu Prasad Yadav was a master blow as he underlined that if the executive wouldn’t work for the people then citizens had no option but to approach the courts.

What was Operation Blue Star and why was it carried out?