After Kejriwal’s Failure, HM Amit Shah in action to Save Delhi

The Supreme Court on last Friday came down heavily on government hospitals over the state of affairs over the handling of bodies in the national capital and said that COVID-19 patients are being treated worse than animals. A three-judge bench headed by Justice Ashok Bhushan and also comprising Justices MR Shah and Sanjay Kishan Kaul issued notices to Delhi government, LNJP hospital and some other state governments seeking their response on the matter.

In view of shortage of hospital bed, Shah announced after a review meeting that the Centre will immediately provide 500 railway coaches to the Delhi government to house COVID-19 patients. “With this, 8,000 more beds will be available in Delhi and these will be equipped with all facilities,” Shah posted on Twitter. From doubling the COVID-19 test in next 48 hours to a proposal to ensure that private hospital provide 60% of COVID beds at low rates.

Amit Shah took the decision that house to house health survey would be conducted in containment zone. For special attention they need to download Arogya setu App on their mobile phone. Following Shah’s order, AIIMS has set up a 24×7 Covid-19 helpline, where any person can take OPD appointments, and talk to volunteers, while doctors can talk to consultants. The central government would depute five more senior officers to the Delhi government, and would commission services of the Scouts and Guides, NCC, NSS, and health services volunteers, Shah said. A team of doctors from the health departments of the Governments of India and Delhi, AIIMS, and the three Municipal Corporations of Delhi will visit all Covid-19 hospitals in the capital, and submit a report on the health infrastructure and preparedness. Home Minister Amit Shah also constituted a committee to fix rates in private hospitals for isolation beds, ICUs with ventilator and without ventilator to provide relief to the common man in Delhi. “Extremely productive meeting was held between central and state government and many key decisions were taken” Kejriwal tweeted after the meeting.

Following this, Shah held a meeting with the Mayors of all MCD’s in Delhi along with Director of AIIMS, New Delhi Randeep Guleria.

Leading from the front Amit Shah paid surprise visit to the Lok Nayak Jay Prakash Narayan (LNJP) hospital to review arrangements related to Covid-19, Shah also suggested psychosocial counselling of doctors and nurses engaged in the service of humanity through fight against coronavirus.

The Home Minister directed the Delhi Chief Secretary to install CCTV cameras in Covid-19 wards of every coronavirus-designated hospital, so that there is proper monitoring and problems of patients can be resolved, a home ministry statement said. Shah directed the chief secretary to establish alternative canteens so that in case there is an infection in one canteen, patients continue to get food. Home Minister met and discussed with senior doctors of the hospital.

Changes on Ground after Centre’s Intervention :

The Ministry approved the recommendations of committee to cap rates of private hospitals as follows:

The rates also include PPE costs. The current rates that go up to Rs 54,000 do not include PPE costs, the ministry had stated. New rate for COVID-19 test has been implemented which is half to the previous rate.

The MHA also said that house-to-house survey in 242 containment zones was undertaken as directed by Amit Shah. The survey that ended on Thursday was done on 2.3 lakh people. The government also said that to increase testing capacity and quick delivery of results in
Delhi, Rapid Antigen testing began on Thursday. So far, 7,040 people across 193 centres have been tested.

Sample testing has also been doubled, the ministry said. “A total of testing samples of 27,263 have been collected in Delhi from June 15 to June 17,” it said. Earlier daily collection varied between 4,000-4,500, the MHA said. The centre government has assisted the Delhi government with 7,30,000 N95 masks, 4,41,390 PPE kits, 25,00,000 HCQ tablets, 18 government approved labs and 25 Pvt labs approved.
Ministry of health and family welfare funded 277cr to the Delhi government to fight against COVID19. 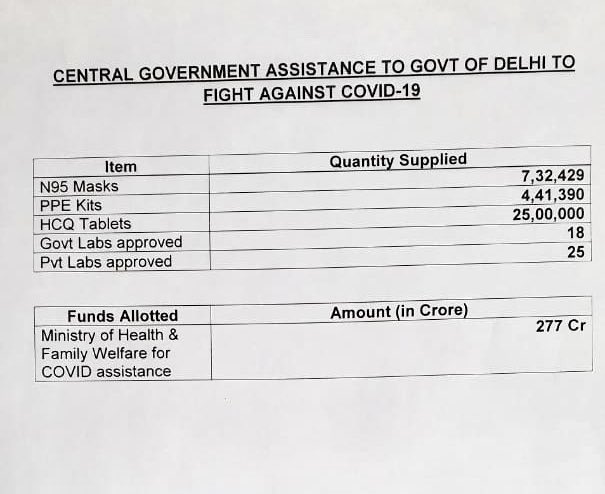 The improvement in the facilities on the Ground after HM Amit Shah took over is visible but the rising cases in the National Capital is still an issue of concern.