On the 7th of June,2020 BJP leader and Union Home Minister Amit Shah launched the BJP’s campaign in
poll-bound Bihar with his first virtual rally because of the Covid-19 Pandemic. Shah
talked about the achievements of the last few years on behalf of the Modi Government
while representing 72000 booths, 95000 power centers and 11000 blocks.
Jagat Prakash Nitya had organized 75 virtual rallies for the BJP. Shah started by saying how
South is always seen as a productive and developed region as compared to the North even if
a lot of goods are produced in the North and how this gap has been bridged by Modi by
2019 with various schemes and development work.

Shah believes that NDA would form the government with 2/3rd majority under Nitish
Kumar’s leadership in the coming 2021 Bihar elections. He says this wasn’t about the
elections as much as it is about democracy and connecting to the public. This has had mixed
reactions from the public. While some of them liked BJP considering a virtual connection
because of the Coronavirus spread by organising a virtual rally to connect people from Delhi
to Patna and Darbanga. Others, most certainly hated the idea of campaigning during these
trying times. People has shown resentment by banging utensils but Shah mocked it by
saying that people finally were listening to Modiji. There is also anger because of how the
poorly and inhumanly laborers were recently treated and because hunger problems of so
many people in Bihar are not looked over. But Shah seemed pretty satisfied with his work.
PM Modi told the Chief Ministers of all the other states that migrant laborers should be
treated well and gave Rs 11000 crore for transporting migrant workers and providing food
and water to them.

ACHIEVEMENTS POINTED OUT BY AMIT SHAH:

▪ During the Modi tenure of 2014-2019, developments in all the sectors were seen.
Some achievements that Shah listed on the virtual rally were-

▪ On 5th August 2019 Article 370, 35A stating Jammu and Kashmir’s special provisions
were revoked by the Government of India.

▪ Ravi Shankar bought in the bill which put an end to Triple Talaq as Modi government
managed to get the better of the opposition in Rajya Sabha.

▪ Ram Mandir conflict was finally approached and dealt with- In fear of losing votes,
other parties had not touched this sensitive issue unless BJP took it up.

▪ Citizenship amendment Act was enacted by the government of India on 12th
December 2019.

▪ Chief of Defense Service (CDS)was founded where he/she would be a single point
military advisor to the government.

• Ayushman Bharat Pradhan Mantri Jan Arogya Yojna was introduced on 23rd
September, 2018. 50 crores were promised free health care. Out of which, 5 lakhs
have already been a part of this scheme.

• After the ‘chaara ghotala’ under Lalu’s , DBT program had been introduced by BJP
where now the transfer of subsidies are allowed through their bank accounts directly

• Saubhagya Yojna – Electricity and LED light bulbs were given out, thus turning Bihar a
‘LED Raj’ from a ‘LALTEN Raj’. 99.93% households were electrified since 11 October
2017.

• Shah claims that 10 crore toilets have been made making India one step closer to
Swachta.

• Ujjwala Yojna – 8 crore women below poverty line were given LPG gas Cylinders and
connections since May 2016.

• Jal Shakti Mandal – Jal Jivan Abhiyan: Modi had started this plan to provide clean tap
water in the in 25crore houses of people by constituting the ministry of water
power.

• 400 Eklavya Model Residential School has been promised for the Tribal society by
the Government of India.

• Ek Desh- Ek Rashan card– People can avail benefits of the PDS scheme regardless of
the place they’re in.

• Namami Gange programme was started in light of cleaning the vast Ganga river.

• One rank- One Pension was also introduced which allows same pension for same
length of service irrespective of the date of retirement.

THE BREAKDOWN OF THE 1,25,000 crores given from the PM fund for the development of
Bihar by Amit Shah – 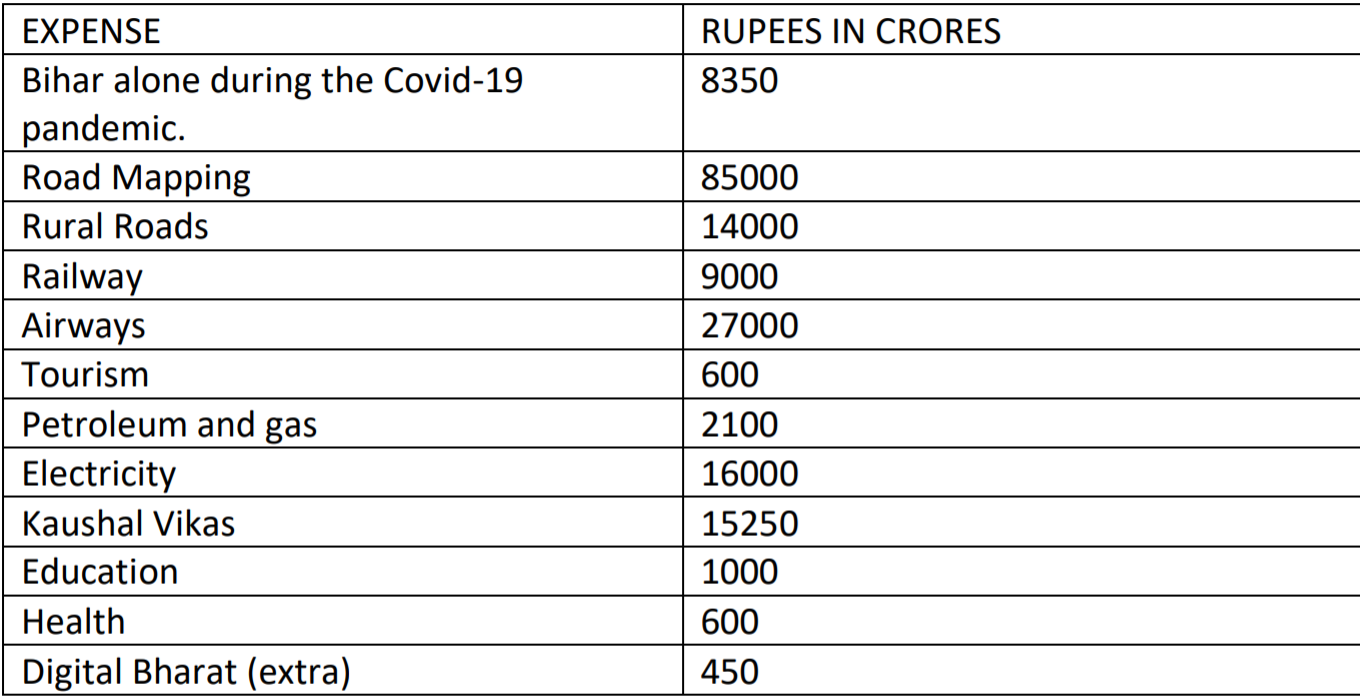 Amit Shah said that the people of Bihar has contributed immensely for the development
and the well being of the nation. Amit Shah also questioned the opposition of what they
were doing for the public other than pointing fingers at the Government after giving away
the list of expenses. He said “I want congratulate the Bihar Chief minister Nitish Kumar
and Sushil Modi for handling the Coronavirus crisis.” He also said that Janata curfew will be
written in golden letters in the history.