The Modi government recently allowed Foreign Direct Investment (FDI) of up to 100% through direct method. This means foreign companies no longer need the permission of the government to invest more than 49% in a company. These sectors include single-brand retail, construction, and civil aviation. The odd thing here is that it is the same BJP party in power who opposed the FDI when in opposition. BJP now have made a U-turn on the anti-FDI stand of theirs.The Modi government has forgotten their own stance on single brand retail when they were in opposition. The order marks another U-turns of Narendra Modi government.

It is also not the first time when NDA government have made U-turns on their promises or policies after coming into power. In the three years of their time in power, they have made several big U-turns on policy decisions and sometimes even made to do one by the opposition. Here are some of the U-turns that the NDA government has made after coming into power- 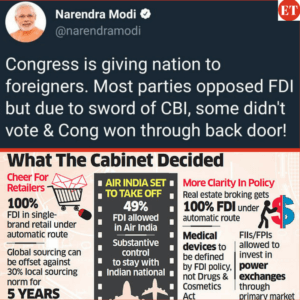 Recently, the Cabinet led by Prime Minister Modi cleared the way of 100% FDI in single-brand retail, construction, and civil aviation. The decision completes a full turn of policy by the Bhartiya Janta Party. The party who made a big ruckus in Parliament and on street about the same proposal of the UPA government has now given the nod. Our Prime Minister then had gloriously tweeted that the UPA government is selling our nation foreigners. Arun Jaitley then opposition leader in Rajya Sabha also said that government is ignoring the opposition and the concern raised by them. The UPA government had to finally go back on that policy.

The BJP government now has done what UPA couldn’t. They have cleared the way for 100% FDI in single brand retail through the direct way. It means that they have lifted the clause of manufacturing 25% in the country, which was a Make in India clause. The change in policy though was expected as they had also opened FDI in defense sector the previous year. The same move was criticised by BJP when in opposition. It looks like the need to accelerate the economy has made Finance Minister change his mind about a couple of things.

The BJP and especially PM Modi were quite vocal about the issue of corruption and that Congress was helping corrupt people. One such example given out in the favor was the concealment of the name of corrupt people. The UPA government had received some names from Switzerland government of people whose supposed illegal money was stashed away in a Swiss bank.

In the run-up to the elections, the issue was racked up as the prime example of Congress’s attempt to hide corruption. Especially, the top leaders of BJP used this to attack UPA and Manmohan Singh. Well, it has been 3 years in power for BJP and we have yet to see or hear any names.

The BJP promised a strong hand on such issues but the result is far from the expectations. The names given by Swiss government has not been disclosed yet. On top of that, the names that appeared in Panama Papers and Paradise Papers are yet to clear. We have had only inquiries into the names but no conclusion.

The Modi government has clearly gone back on their promise of giving out names of corrupt people. Not to mention the promise of bringing back black money from abroad, a promise forgotten by BJP.

U-turn of Narendra Modi Government on Enclave Swapping With Bangladesh-

In 2015, the BJP government gave itself a pat on the back for agreeing on a historic deal with Bangladesh. The deal was on the disputed areas between the two countries. An agreement was reached that India and Bangladesh will swap some enclaves with each to resolve the four-decades-old border dispute. Though the deal was a great one and resolved the dispute the BJP government had again done a U-turn.

Also Read -   What Next For Goa's Politics?

Read more: Modi Government: Here Is How It Has Performed Till Now!

The agreement to swap enclaves was thought out by the UPA 2 government. The Manmohan Singh led government had tried also to get it passed but they feared the opposition. The BJP, then in opposition had categorically opposed the proposal. Terming the move as disrespect to our nation. And questioned the need to give our land to Bangladesh.BJP spokespersons alleged that government was thinking more about Sheikh Hasina and less about India’s territory.

The Modi government reached a conclusion and agreed on the deal with the Bangladesh counterpart in early 2015. Then they also managed to pass it through parliament with the support of the opposition, terming the bill as the resolution to the border dispute. The BJP yet again did a U-turn on the policy that they had when in opposition.

The BJP yet again did a U-turn. This time on the policy that they had termed as compromising of national interest when in opposition. And this time they also earned mileage through it.

U-turn of Narendra Modi Government on The GST- 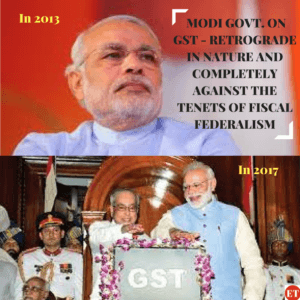 Before 2014, PM Modi was one of the most vocal criticizers of the GST bill. When he was Chief Minister of Gujarat, his government made statements against the GST. They termed it as a bill which will have a bad effect on revenue systems of the states.

Fast forward three years and demonetization and you have a GST regime in the country. The decision was much credited to PM Modi and his government. They took all the credit for implementing the GST and passing it through Parliament. The BJP will now surely showcase GST as one of its gems in run up to 2019 elections and boast about it. Even the ceremony to launch GST was compared to Independence Day ceremony of 1947 by the BJP.

Also Read -   Why the bubble of Fake news must be burst?

The irony here is that in 2011 the same BJP had become vocal against the decision of UPA government to table GST bill. BJP then managed to not let government discuss it in the parliament. They have come a long way from since then, from sitting on the left side of the speaker to the right side. Perhaps the change of seats has also facilitated the U-turns of Narendra Modi government.

For the Congress though, the glimmer of hope apart from Rahul Gandhi’s new version has been the rollback of this Land Acquisition Bill. The government had in its pompous passed the ordinance for the bill and persisted with it for next few months.

The bill which was termed by the ministers of government as a landmark bill to ease the acquisition of land met with some uneasy questions on its way. The bill was opposed by the Congress on every level from parliament to the streets. And for change, other opposition parties also joined them in their protest. The government then hit back with a string of PR activity on the bill. Then they tried to reason with the opposition but then hit a roadblock. The bill was then opposed by the organizations such as Kisan Sangh affiliated with the BJP and also some organizations of Sangh Parivar.

The government was then forced to pull back the bill and the ordinance as well. The so-called landmark bill was subsequently shelved and is now has become a landmark of U-turns of government.