How BJP became the single largest party in Karnataka Polls 2018?

With the pace and intensity Modi Ji is going, I fear from the PPP-Punjab, Puducherry, and Pariwar just the Pariwar will stay with the Congress. So the results have been announced already and the man has again proved invincible. People have reposed their trust in his development agenda and again many political pundits and exit polls have fallen flat. Let’s look at the results of Karnataka Polls 2018 and what could have happened next?

Hung Assembly: The Third Time BJP has single-handedly defeated the grand old party of India, the Congress and a strong regional political party, the JD(S) with an appreciable margin. 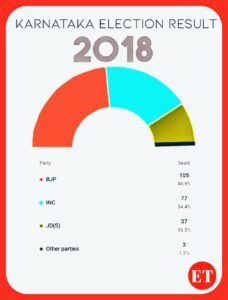 The voters of Karnataka may have thrashed every dream of Congress and Siddharamaiya and voted them out of power but played a dirty trick with the BJP. BJP is falling short of 8 seats to form a government. A party needs to have 113 seats out of 224 to prove majority on the floor of the house.  Reasons behind such a sweeping victory by BJP:

1. The Lingayats voted for BJP: Lingayats are numerically significant in Karnataka around 14% of the population and have always been supporters of the saffron party. The Siddaramaiya government in order to have the vote share gave them the long demanded, minority religion status. The expectation of Congress was to have the support of the community in elections. But the lingayat have proved their allegiance to BJP.

2. Vokkaligas voted against Congress: Vokkaliga is a community which traditionally supports JDS. Congress has been expecting some help from this community.

Also Read -   What is the Strategy of Congress for Karnataka Polls?

3. Congress in Dakshina Kannada failed miserably: Whereas in 2013 Congress had won seven out of eight seats and this time only U T Khader from Mangaluru could register a win from Congress. Rest all seven seats belonged to BJP.

4. Coastal Karnataka: This region is a bastion of the RSS and BJP. Undeniably the most reliable vote bank of BJP in Karnataka. The grand win of BJP can be attributed to the coastal Karnataka in a major way.

5. Hyderabad Karnataka: The Telugu speaking had protested against BJP during the bifurcation of Andhra Pradesh, but apparently that has not stopped them to vote for development. BJP has bagged in total 15 seats out of 31 seats.

Who are the major winners and losers of Karnataka Elections 2018 –

1. B.S Yeddurappa: The Chief Ministerial candidate has contested from Shikaripur segment and won against major rival G.H Malathesh by a vote margin of 35,397. Even with this mandate and a sweeping mandate for BJP, it is still unsure who is going to be sitting on the chair of Chief Minister.

2. Siddaramaiah: Contested on Chamundeshwari seat and Badami seat. He lost to G.T Dewa Gowda in Chamundeshwari by more than 35000 votes. Though at the Badami seat he somehow managed to win against BJP’s Sriramula with a meager vote margin of 1600 votes.

3. H.D Kumaraswamy: From just a kingmaker to possibly a King, the JDS leader has won on both the seats he contested on- Channapatna and Ramanagram. Defeated C P Yogeshwara from BJP and Iqbal Hussain from Congress.

4. Preetham Gowda: Now this win by Gowda of BJP is remarkable as Hassan is considered an indisputable area of the JDS and Gowda defeated four times MLA H S Prakash of JDS.

Ball in the court of the Karnataka Governor:

In an inconclusive result like that of Karnataka, the powers and role of Governor become important. In case of a hung assembly, the governor has the options:

The governor of Karnataka, hence keeping all the factors in mind have called B. S Yeddyurappa, the leader of the single largest party for floor test and to prove majority in the house. The BJP was falling short of 8 seats. The allegations of paying 100 crores to MLAs have already been casted on the BJP. Under all these circumstances, B. S Yeddyurappa has taken oath as the chief minister of Karnataka. He has been given 15 days to prove his majority on the floor of the house. But this is not the end of the story. There is a reason for a low key swearing-in, unlike Gujarat. Read out Has Karnataka’s Governor Decision Made Way For Unconstitutional Democracy?

Then What is the twist?

The Congress and JDS have outright challenged the decision of the governor of Karnataka, Vajubhai Vala. Congress feels calling Yeddyurappa to form a government is in the confrontation of the constitution. Congress alleged that Governor has given BJP the license for poaching and horse trading. Consequently, the apex court asked for letters submitted by B S Yeddyurappa.

Hence it’s all in the uncertain zone yet. The court has its own process. JDS and Congress are fighting their own crusade. And for BJP, the struggle is real now, even after performing exceedingly well, the formation of the government and proving majority may not be a cakewalk.

Summon the brightest of the bright! Let us wait for the die to roll. All eyes are on Amit Shah.