We are a few weeks away from the most expected event of the year, General Elections 2019. The Namo led NDA who won the last elections with tremendous love and support from the public is witnessing its last days of power in their 5-year tenure. They are eyeing for a successive successful second run at the parliament. But what awaits them in the 17th general elections is still a mystery. The Modi wave is not so prevalent as it was earlier but it is still high enough to help BJP in retaining the power.

Will BJP be able to retain its govt in General elections 2019?

Losing the five state elections in the last month of the previous year, BJP lost the three states in which it was in power earlier. This reduced the number of states ruled by the BJP with or without alliance to 16 out of the 29 states which includes Himachal Pradesh, Uttarakhand, U.P, Manipur, Maharashtra, Jharkhand, Haryana, Gujarat, Goa, Assam & Arunachal Pradesh with BJP government & states like – Andhra Pradesh (TDP), Bihar (JDU), Jammu & Kashmir (PDP), Nagaland (NPF), & Sikkim (SDF) which has BJP’s government in coalition with the regional parties.The important point to note is that BJP has covered large states like UP which has 80 seats, Maharashtra which has 48 seats and Bihar with 40 seats in the Parliament. In total these states alone constitute 297 out of 543 seats. 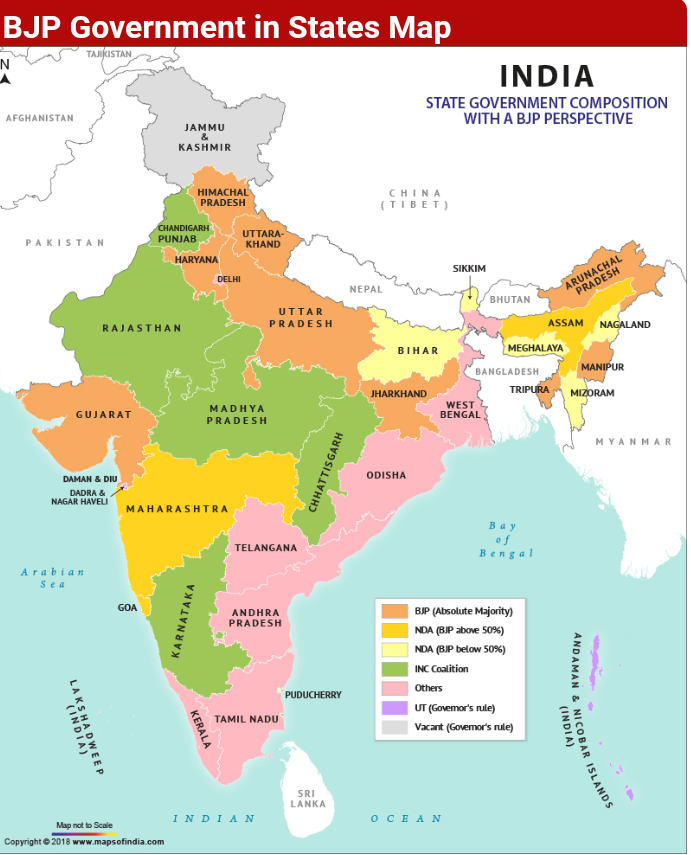 2014 vs 2019
Back in 2014, People sick of scams, were not so pleased with the UPA rule and expected a change. That’s when the youth opted for Mr.Narendra Modi based on his tremendous work as Gujarat CM. The BJP won the elections with absolute majority. In 2014 elections the importance was given to (the candidate) Narendra Modi, an individual rather than the party as a whole. Even in 2019 the importance is expected to be given to an individual irrespective of the group they represent.

The 2014 election was very similar to that of the 1967 general election. From new candidates to the number of seats and enormous victories, the two years share a lot in common. In 1967, for the first time, the Congress had fought without Pandit Jawaharlal Nehru, under the leadership of Indira Gandhi. In 2014, the BJP fought the general elections under the new found leader Narendra Modi. The Congress lost in many places but acquired a majority of 283 out of 520 seats in the 1967 election. In 2014, the Namo led BJP won 282 seats and received a warm welcome. Both the leaders had to meet the conflicts that were arising within the party.

Many would remember Gaurav Pradhan who rose to fame by predicting the 2014 elections. Predicting elections are now a trend. It is a complicated process but people enjoy doing it. Every single individual from the first time voters till the senior most citizens of our country predict the next PM of our country. One labels them based on assumptions and opinions, but Gaurav Pradhan accurately states it after a lot of analysis. Not just the 2014 election, he predicted the Presidential election of United States as well as the Punjab and UP elections. He answered the most asked question in India, Who will be the next PM of the nation. His predictions are to the point and accurate because of the unique methodology that he uses. He uses the mood of the citizens to predict the elections. He analyzes the thoughts shared in social media, intelligence information and geopolitics to come up with his MOOD ANALYSIS. He has valid statements behind his predictions. He calculates that 2019 belongs to none other than Narendra Modi.

Also Read -   Understanding the changing equation of the Guru-Shishya relationship

The interim budget is all about creating a balance between short term needs and long term goals. With the concentration centered on three main segments i.e the farmers, informal sector workers, and salaried taxpayers, the nation would benefit a lot if executed as per the budget. This budget is considered to be one of the best election year budgets. Creating a budget for the full year concentrating more on the nation’s betterment than just on the need for a vote shows the confidence in the NDA government in being re-elected.

What are the challenges ahead for BJP in the General Elections 2019?

BJP, two years back, could have not been defeated however a lot changed during the course of the time. The BJP has not met with all of its promises and that is one of the basic reason for this change. The recent electoral defeats in December last year was a wake-up call for the BJP. It showed them their position. But when we analyze deeper NaMo has more support than the acceptance that the party as received as a whole and so one cannot assume that the state electoral defeats represent the general elections 2019. With the Hindi heartland moving away from supporting BJP and South paving no way to BJP, they have to overcome these challenges to create a second run in power. The government saw angry farmers protesting and complaining about the low prices for crops yet the rural sector has also been benefited with proper sanitation, cooking gas and electricity facilities being provided. Modi is not receiving the same support that he gained in 2014 but is still a credible leader. He is expected to use his style of surprising his opponents and create an apt scenario for the BJP to taste a victory in the most expected general elections 2019.

Also Read -   What Next For Goa's Politics?