After the victory of BJP in Gujarat which created a win-win situation for both the National parties, Bharatiya Janata Party and Indian National Congress, BJP has started looking towards Karnataka which is generally considered to be the gateway to south politics by many political strategists. Unlike, other parts of India, Southern politics are always fascinating, interesting and way different too. The minimal effect of Modi’s wave during 2014 Lok Sabha elections evidenced the same. However, with the advent of BJP in several issues in south politics, the erstwhile situation seems to be changing, which proves that “BJP” is skeptical about its strategies. Let’s look in detail can BJP win Karnataka elections 2018?

After 1983, Kannadiga’s state assembly polls went through various unexpected leaps and bounds with the emergence of various political ideologies. It was Congress which was in power till 1983, thereon there were many twists in the plot and there rose a belief, “No government which was in power, takes charge”. The question is “Will Rahul Gandhi led Congress to turn it into a myth or Modi to further strengthen it ?” Going through the circumstances till date, both the parties are equally poised and had their own records. The present scenario of Win-win created in Gujarat preceded by Mr.Gandhi taking over the presidency of INC might have an effect if Sonia’s way of silent diplomatic yet strategic politics is followed. However, our election king’s charismatic party is on a lighter advantageous position in the state.

Anti Incumbency against Congress might have an impact on Karnataka elections 2018:

The anti-incumbent factor is at a tremendous growth rate in the state against Siddaramaiah’s government. Karnataka is listed to be one of the most corrupted state (as per the survey conducted by CMS) and scams at regular intervals under congress rule added salt to the issue. Govindaraju’s diary project, which was dropped unceremoniously or abruptly after clearly exposing the Congress high command had actually mutilated and damaged the Congress government casting an arrogant face of state’s leadership.

Bengaluru’s steel flyover project and the havoc created ad hoc in the only big state with Congress’s power.
With INC’s record of scams increasing, BJP’S distance to victory decreasing. However, a point to be noted is unlike, Yeddyurappa neither Siddaramaiah nor his ministry has been guilty of fraud during his tenure. This is an add-on to Congress. Even though Yeddyurappa, Ex-CM, and present BJP’s CM candidate, was accused of corruption against him and his sons during his tenure, the clean chit issued might help him.

Least focus on infrastructure development of Bengaluru or complete negligence of BBMP as opined by many is the reason for shifting and downsizing of Industries. Schemes like “Anna bhagya, Shaadi Bhagya, krishi bhagya, were introduced for the welfare of backward sections of society, however, it ended in called “schemes to solve earlier damages”. He also rushed many visionary projects in the state which are an add-on. However, the government is guilty of law and order issues, where more than twenty political murders happened. All these led to growing intolerance in people. So, there is every chance that people might think to give BJP a shot, even BJP had its own set drawbacks but Modi’s govt can overcome these by instilling in them “trust”.

The shift of Strong leaders can turn the direction of Karnataka elections 2018:

SM Krishna of “vokkaliga community” who was believed to be the person behind Bengaluru’s development as IT hub has joined BJP. Srinivasa Prasad, a Dalit leader also shifted from Congress to BJP. Kumara bangarappa, So of former CM late Bangarappa of Idiga, a backward community, joined BJP along with two ex-MLAs. Jaya Prakash Hegde, a strong leader in coastal regions too joined kamaladalam.

Strong leaders from many parts of Karnataka with clean and good track records are the assets of the party. B.S.yedyurappa is by far considered to be the effective leader who knows and has a way with Kannadigas. He being a lingayat himself may act as a vote bank in the elections. However,  Eeshwarappa’s episode may have an effect.

Caste politics are often referred to as the vote bank politics are old yet “golden” technique of gaining votes in our secular state. Karnataka population, though not announced officially, consists of lingayats in majority followed by vokkaligaas and others. So, with the Hindutva agenda and anti-nepotism, upper castes of society are generally inclined to BJP. However, with the advent of Siddaramaiah’s idea of giving lingayat’s a separate religious status and the concept of Karnataka’s pride BJP may lose few votes. Rahul Gandhi’s idea of secular rhetoric may also create a havoc. Even Post-GST and demonetization periods, Industrial and business communities are still with BJP, a business-friendly party. Famous Babri Masjid case is all set for what is called as “final hearing” just before Karnataka elections which may have an impact on Karnataka elections 2018. 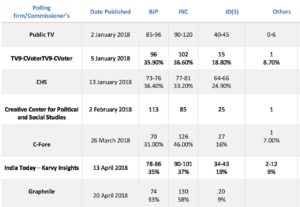 After all, the interesting yet common thing is poll surveys conducted by one party, to that party and for that party. Generally, polls are conducted by independent bodies on the basis of facts but the interesting thing here is first C-Fore sanctioned by Congress conducted a survey which resulted in putting Congress ahead with 120-132 seats, BJP with 60-72 seats, and JD(S) with 22- 25. Then as a counteract, BJP too hired another poll survey agency by name Creative center for political and social which put BJP with 113 seats, Congress with 86 and JD(S) with 25. The fun fact here is the prediction on JD(s) remained constant, which shows both the parties are trying to woo H.D. Gowde led party!! A point to be considered is the results which turned in favour of Congress in bye-elections conducted early this year in two constituencies of Karnataka.

As, the election commission has announced the election dates for Karnataka assembly elections 2018 which will take place on 12th May on all 224 constituencies in Karnataka. Both the party workers are working day and night to bring glory to their respective political parties. While politicians are having hectic days planning for strategies, latest opinion poll surveys seem to become not just an answer but a trend too. C-Fore had conducted a survey and the results were announced just a few days back which ranks Congress on the top with 126 seats and 46% vote share, followed by BJP with 70 seats and 31% vote share. JD(S) is expected to win in 27 seats with 16% vote share and the rest 1% to independents. Though it is officially unknown, presumably known that this survey was backed by Congress’s support. One interesting fact here is the survey results instead of portraying a clear image, rose many eyebrows I.e, the Karnataka opinion poll survey rose many questions than clarifications. However, Kannadiga voters should stay unaffected with these opinion polls at least for few more days till “big guns” start a poll survey. Whomsoever might be the survey conductor, one sure thing is that “all these are based on sample analysis” and the actual picture is really big and different too.

All in all, there is no clear stand to say which party’s flag may fly in Karnataka elections 2018, it is clear that there is no easy situation for any party. One side is the efficient strategist Amit Shah with Modi’s wave on hype followed by strong local leaders, other is the incumbent rulers with diplomatic and silent strategies and strong local leaders with good track records. Unlike the win-win situation created in Gujarat in spite of congress’s loss, there won’t be such case here, both the parties are equally poised and have equal chances for victory. So either win or loss !!

As per the situational analysis of Kannada politics as of now, it is evident that both BJP and Congress might not be able to make majority resulting in janata dal a kingmaker. As far as  JD(S) movements are considered, as of now they are neither favouring nor condemning any major party. However, Rahul’s address in Old Mysore region is quite notable issue.

It is not an exaggeration to say that upcoming few months left over are to decide the state’s fate. Already BJP has started it’s 84 -day plan and Congress is in its strategy of secular rhetoric.

On an end note, there is going to be a tug of war between BJP and Congress. Karnataka elections 2018 are turned into a prestigious one for both Congress and BJP, each having its own reasons. Let’s wait for other plot twists expected in the coming days.  This is just the beginning of a new cover story to be discussed, many twists are yet waiting. Stay tuned for this space.

Also Read -   Is the economy of India doing better under Modi?

Has Karnataka’s Governor decision made way for unconstitutional democracy?

Rajasthan elections 2018 – Can Sachin Pilot lead the Congress to...