Housing is one of the most basic means essential for human survival. Yet to own a house is still a dream for a major chunk of our population due to financial constraints. The last few decades have witnessed the launching of several Central and State schemes to provide the homeless with houses. These schemes have achieved have limited success but the problem is far from over. The 2011 census counts 17, 73,040 homeless people in India –  52.9 % in urban areas and 47.1% in rural areas – on the basis of a definition that identifies a person or family as homeless if they do not live in a ‘census house,’ which refers to a ‘structure with a roof.’

The scheme is to be implemented in three phases with a focus on 500 class-I cities.

The major beneficiaries of the scheme are women and backward classes. Transgender, Widows and differently-abled persons are given preferences. It is also mandatory that while registering, the beneficiaries have to mention their wife’s name or mother’s name making it a pro-women scheme. 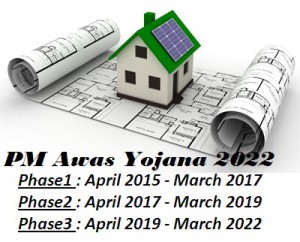 The scheme seeks to address the housing requirements of urban poor and slum dwellers. A major component of this scheme is In-Situ Slum Redevelopment. Its focus is on bringing every slum land to formal urban settlement, to provide people from slums with proper urban houses. Another component is the promotion of affordable housing through credit-linked subsidy.

Under this component, EWS (Economically Weaker Sections) and LIG (Low Income Group) can obtain a loan up to Rs. 6 Lakh with an interest rate of 6.5%. From January 2017, the credit linked subsidy scheme is also available to taxpaying middle-class population who don’t have a pucca house. The people who have income between 6 and 18 Lakhs per annum are thus eligible.

The progress of PMAY-U under Modi Government –

*Including incomplete houses of earlier NURM.

A total of one crore houses for the urban poor are supposed to be constructed by 2022 under the housing scheme.  And given the ambitious target, only 13, 59,137 houses have been completed so far. Gujarat has the highest number of constructions with 1, 76,625 according to the data on PMAY website. Its followed by Madhya Pradesh at 1, 59,592 with Andhra Pradesh at third with 1, 57,471. While the number of houses sanctioned is close to 69 lakhs, the government will to improve its pace if the target of 2022 is to be achieved.

Rural housing program, as an independent programme, started with Indira Awaas Yojana (lAY) in January, 1996. Although lAY addressed the housing needs, there were some problems like non-assessment of the housing shortage, lack of transparency in selection of beneficiaries, low quality of houses, loans not availed by beneficiaries and so on. Thus this was revamped as Pradhan Mantri Awaas Yojana (Gramin) w.e.f. 1st April 2016.

The scheme aims to build 4 crore pucca houses by 2022.  The minimum size of the house is to be 25sqm (raised from 20m²) with a hygienic cooking space. The unit assistance under the scheme is Rs. 1.20 Lakh (raised from Rs. 70,000) for plains and Rs. 1.30 Lakh (raised from Rs.75000) in hilly, difficult areas. The cost of unit assistance in this scheme is shared between Central and State Governments in the ratio 60:40 in plain areas and 90: 10 for North Eastern and Himalayan states.

One of the most important features of PMAYG is the selection of beneficiary. To ensure that assistance is targeted at those who are genuinely deprived PMAY-G selects beneficiary using housing deprivation parameters in the Socio-Economic and Caste Census (SECC), 2011, which is to be verified by the Gram Sabhas ensuring transparency.

In PMAY-G, programme implementation and monitoring is to be carried out through an end to end e-Governance model- Using AwaasSoft and Awaas App. Space technology and IT platforms are also being used to monitor the cycle of house construction, right from identification of beneficiary to construction stages of houses to completion and each stage is being geo-tagged. 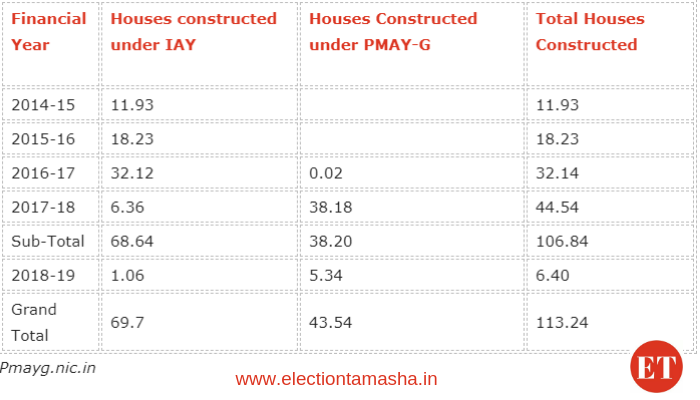 2.95 crore houses are set to be constructed by 2022 to achieve the set objective of PMAY-G which has been decided to achieve in phases. In the first phase, the target is the construction of one crore pucca houses by 31st March, 2019. A total of 1.07 crore rural houses have been completed over the last four years (2014-15 to 2017-18) which include completion of 38.20  lakh Pradhan Mantri Awaas Yojana – Gramin (PMAY- G) houses and 68.64 lakh IAY houses that were sanctioned in 2014-15 and 2015-16 and prior to that. If the figures of the current financial year are also added to this achievement under the rural housing scheme the achievement from 2014-15 till date becomes 1.13 crore completed rural houses.

Road ahead for PMAY-Housing for all

One of the reasons for inefficient implementation of the PMAY (Urban) is its heavy reliance on the private sector – Most of the sub-schemes depend on private builders who are reluctant in constructing houses for the poor. Non availability of land further creates a burden. Add to it the poor state of land records and the insufficient documentation on the people, the situation is worsened. States need to work upon updating the land records and creating a cohesive database for the beneficiaries. Awareness of the benefits of this scheme is still unknown to a vast section of the population.

While the scheme is very progressive, such lacunas hold it back. Concentrated efforts by the centre and the states are must to work on these shortcomings and without a doubt the progress of this scheme can prove to be a major plus for BJP in the upcoming elections.

Results of the 2017 elections, particularly of Uttar Pradesh and Gujarat provide an interesting insight into the progress and outcomes of PMAY. Ground reports have indicated that among many factors, the granting of houses proved to be a game changer in favor of the BJP. Before the elections, Gujarat led the way with 54,474 constructed, highest in the country. Recently concluded MP elections too showed a similar picture. 12, 11,454 houses were constructed under PMAY-G in the state. Though MP was lost marginally by the BJP, surveys before the polls showed that the beneficiaries of PMAY-G were delighted with the scheme. So while this number of houses constructed couldn’t materialize into votes for state election, they will certainly play a role in the lok Sabha elections.

One more positive to take from Madhya Pradesh is that it’s 3rd in the list of benificiaries of Credit Linked subsidy scheme under PMAY-U. This is further bound to strengthen BJP’s position. Gujarat leads the way with 88,000 beneficiaries followed by Maharashtra at 74,000. Such positive numbers from 2 BJP bastions can make major difference with regards to voting share of BJP. Even Non-BJP states like Andhra Pradesh have 1, 57,471 houses completed till date. This can help shift the preference tide in favor of BJP.

Another report shows that PMAY-G has made its way to as far as the Majauli Island, in Brahmaputra River. Stilt houses are being constructed which would benefit the people of this massive flood prone area. Coupled with other amenities like toilets and provision of LPG under the ujjawala scheme, the impact of this is evident in the voices from these regions.

With 2019 elections on the horizon, the benefits of PMAY are being seen at just the right time. With mandatory electricity, water and gas provisions, PM Modi is not only provding the citizens with proper housing but also improving the standard of living considerably. Innumerable lives have been transformed through this scheme. It won’t be a surprise if this proves to be a major catalyst in increasing the BJP vote bank for the upcoming elections.

Top 12 Takeaways From the First Interview of PM Modi in...