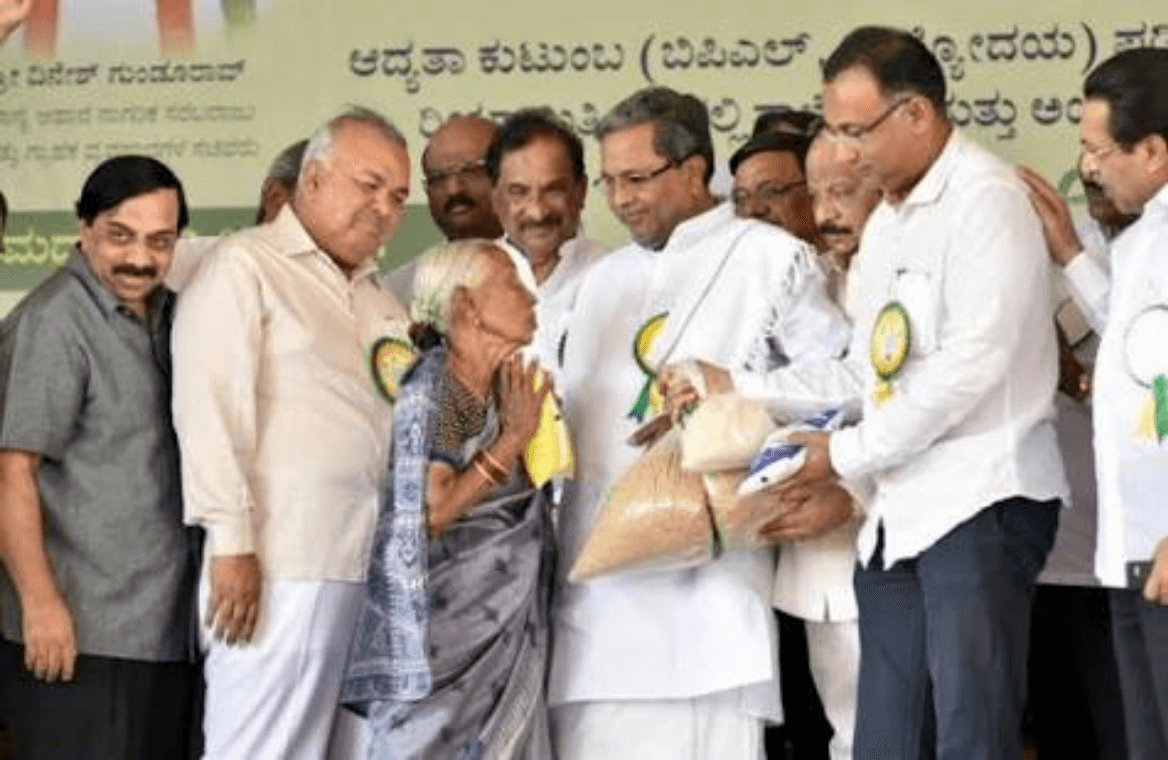 One of the most talked about scheme before the 2014 elections were the Anna Bhagya scheme proposed by the Congress. They promised rice to the poor free of cost ( as against Re 1/ kg of rice earlier) and also one Litre of palm oil at Rs 25 and 1 kg iodized salt at Rs. 2, One KG of sugar at a subsidized price of Rs 13.50 per KG is provided.

The scheme in itself is not new and is implemented in many states. The only thing that varies is the prices of the commodities. Usually, the price come down than previous government. The same thing happened here. The result though remains the same. The public distribution system has flaws in it on various levels. The low quality of grain distributed and malpractice on lowest level the Kirana store is rampant.

Congress claims that they have reached 107 crore family, meaning ¼ of the total population. The reality though is very different with a large number of children still children’s being malnourished in the state and not mention the raising farmer suicide cases.

To tackle the problem of Children malnourishment and drop out, Siddaramaiah government launched this program. The scheme guarantees 150 ML milk is being provided to children free of charge thrice a week in government-funded and operated schools. The responsive to the scheme was one of positive enthusiasm and benefitted over 1 Crore children. The enthusiasm though died down after a year or so.

At the start, the scheme successfully increased the number of children attending the college. As the scheme came out of the spotlight the malpractices started. Students started complaining about a foul smell coming from milk and a lot of mixing of water. The quality of mild deteriorated over time and still has been not given any consideration by the government.

Did Siddaramaiah accomplish his dream of a Hut-free state?

Another major initiative taken by Siddaramaiah government is to make the state hut free. The government aimed at constructing over 12 lakh houses in 5 years at the rate of 3 lakh houses per year. For the same, they increased the unit subsidy to 1.2 lakhs from 75,000 from 2013-14.

According to the government data, they have constructed 3.17 lakh houses in 2013-14 and 3.02 lakh in 2014—15 with a total spending of Rs 4555 crore. In 2017, Housing minister M Krishnappa said that their government has constructed around 12lakh homes and will build 6 lakh more in next 2 years.

The initiative was to provide every one of their own pakka house but then it has fallen short. Many activists point out that there still exist around 2000 slums in Karnataka states and have threatened to stage a protest if govt. doesn’t fulfill its promise. Now BJP also has identified the issue as one of their promises.

In a recent press release their Opposition leader in State assembly, Jagdish Shettar addressed this issue. He promised that if BJP comes to power they will ensure that all the slum dwellers will get proper roof and infrastructure.

The Rajiv Arogya Bhagya scheme was launched for benefit of people who are Above Poverty line.

Congress promised that the beneficiary pays only 30 percent of the medical expenditure and the rest borne by the Government. It was an extension of Vajpayee Arogyashree scheme launched by the previous BJP government in 2011-12.

The previous scheme though only focused on Below poverty line people, the Rajiv Arogya Bhagya scheme extended benefits to APL people as well.

However, the scheme has not enjoyed much success like its predecessor. The scheme had only 5,307 beneficiaries until September 2017 in contrast to over 3 crores for Vajpayee Arogyashree. The government blamed the national promotion of the scheme for low turnout, although the scheme has its own application.

According to industry experts, the scheme failed because despite the government’s promise and claims the beneficiary of the scheme had to pay 70% of the bill and not 30% as promised. The scheme also did not include all procedures but very selective ones.

Siddaramaiah government will now have to face answer, why did they not keep their promise of 30% payment only in elections. The government even recently tried to build one concentrated scheme of all its medical beneficiary schemes. With the aim of simplifying procedures or maybe to hide its failure to deliver on its promise.

When Congress came to power in 2012-13, they increased the subsidy given to farmers for selling milk to Rs4 This meant doubling up of subsidy from Rs3 to Rs4 when already the milk production was at the growth rate of 11%. Congress on its part delivered on their promise to increase the subsidy given but long-term gains are not to be seen.

The Karnataka Milk Federation (KMF) has now become a ship leaking heavily. It has recorded losses in subsequent years. The rise in subsidy has seen the milk production increase drastically. As claimed by the government that around 10 lakh families have been added in the mild production cycle but benefits are not proportionate. As KMF, runs dry on profits, farmers have to realize that they too are getting less paid in comparison to their compatriots in other states.

A farmer in Gujarat is paid Rs 32out of Rs38charged whereas in Karnataka only 23 is paid to a farmer of Rs33 charged. The scheme also aimed at providing alternative income to stressed farmers. This has also not been able to even stabilize farmer’s suicide number. The deaths have only increased since.

The subsidies given to farmers reach about Rs4000 crore. On that government, is also buying the milk powder that KMF makes at a high price for their scheme of Ksheera Bhagya. The issues with that scheme are already been discussed and those only add to lack of inefficiency in administrative functioning.

Under their new economic policy of 2013-18,  Congress government launched this scheme for the benefit of textile industry. They focused on small handlooms and weavers. With a budget of over 1000rs for the scheme allotted for the Duration of 5 years.

Read more: What Is The Strategy Of BJP For Karnataka Assembly Election 2018?

The scheme included a waiver of loans, giving training, providing subsidy on equipment and power along with helping them to market their products. The government spent 167.00 lakhs over 798 weavers for waiver of a one-time loan. They also spent 3559.49 lakhs for generating over 60,000 thousand new jobs in co-operative handlooms.

The scheme largely has been successful in generating employment. It has also revived the textile sector and subsequently aided the manufacturing sector. The later is expected to grow around 4.9% in 2017-18 in comparison to 3.5% in 2016-17 and above the national average.

Will Congress be able to achieve its breakthrough in 2019 election?