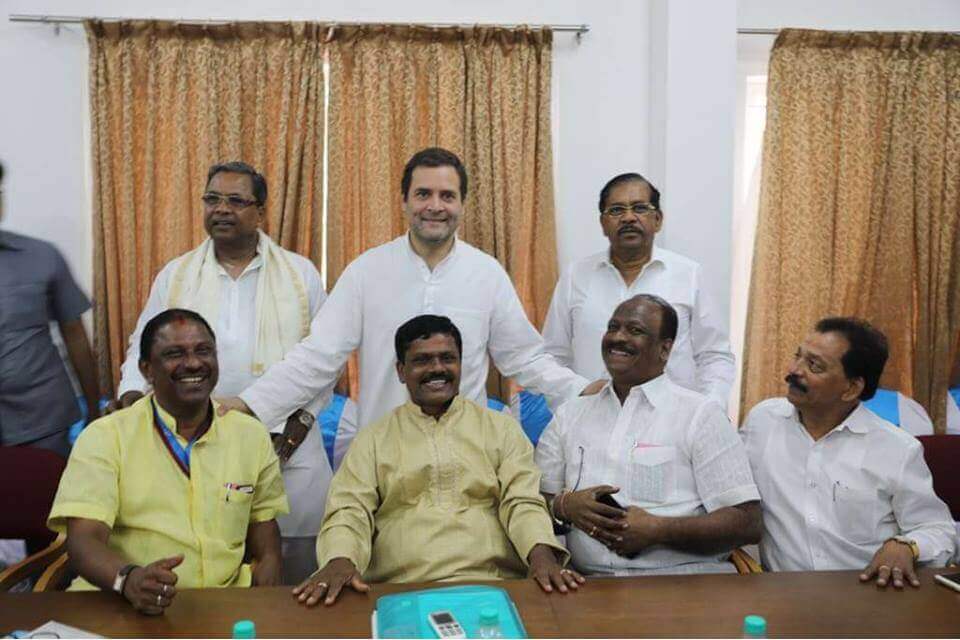 As the tenure of Karnataka assembly will come to halt on May 30, 2018, will open new grand challenge to prevent its hold over one of its thrones for INC(Indian National Congress) and a battleground will be set for 15th Legislative Karnataka Elections.

The composition of Karnataka’s Assembly:

Karnataka is one of the seven states in India, where the state legislature is bicameral, comprising two houses. The two houses are the Vidhan Sabha (lower house) and the Vidhan Parishad (upper house).
There are 224 members of the Vidhana Sabha.who are directly elected by people through adult franchise.

Karnataka as Base for Congress:

Currently, Karnataka’s assembly is one of the Congress’ Bastion.Karnataka also witnessed five times President rule.
The Congress had unseated the BJP in Karnataka in 2013 by winning 122 out of 224 MLAs.M.Siddaramaiah was chosen and sworn in as CM on 13 May 2013.

Challengers of Congress in Karnataka Elections:

However, history itself bears the fact that Congress many times faced tremendous challenges from many tough challengers among which prominent ones are BJP(Bharatiya Janata Party), Janata Dal and Janata Dal(Secular).
The Congress Mukt mission and Saffron rule of BJP is in full swing from 2014 to till date, with the latest victory in Tripura and Nagaland Assembly elections.

BJP now eyes upon its first Southern Win through Karnataka elections as its next catch by beginning its Election campaign on 2 November 2017, successfully completing 85-day rally under the leadership of S. Yeddyurappa.Hence will give a tough grip challenge to Congress.

Amidst of too many gory challenges, it will be very interesting to know about the Election Strategy Congress to retain its power in its own fort.

The list of aspirants is never ending and Congress in Karnataka is having a torrid time in finalising the list for the forthcoming Assembly Elections 2018. The Congress wants to leave nothing to chance and is trying to put together its best candidates.

The screening process in Karnataka is particularly very strict because the prospects of candidates swinging especially when BJP is giving toughest competition and simultaneous defeats, therefore the elections likely to be a close call, the parties want to ensure that only winning candidates are in the fray.

Congress is also keeping a Factor in consideration regarding New, undecided and young voters in determining their candidate selection list and there are several other factors also that are being taken into account while selecting the candidates. For a start, Congress would be eyeing the 60 lakh new voters in the state. This is a huge number in itself considering it accounts for 12 per cent of the state’s electorate. Further statistics also show that one-third of the electorate is a young voter.

The Congress is in the process of finalising its list of candidates has already taken the above two factors into consideration. It would bank heavily on the new voters and also look to target the young electorate. The Congress is looking for younger candidates to woo the young voters.

Also Read -   What effect might UP bypolls have on Loksabha elections 2019 ?

The party has set up a screening committee and its senior leader Madhusudan Mistry is in charge. For every candidate, he has a tough set of questions and unless the test is passed, there is no way that the candidate would get a chance to throw his hat into the electoral ring. In addition to this various caste equation based on a survey are also being taken into account.

The Congress has adopted a strategy of tough screening process while selecting its candidates. The high application fee fixed by the party has however not deterred the aspirants from applying.

Read more: What Is The Strategy Of Congress For Karnataka Polls?

Congress leaders say that while these equations are in play, there is also another key factor. If the party even has an iota of doubt that a candidate may lose, then he/she is being kept out of the race. This is particularly being applied in those constituencies were there the call is a close one.

Congress President Rahul Gandhi will visit poll-bound Karnataka twice after March 20.he will visit Mangalore and Udupi on March 20 and 21, while his second visit would be to Mysore and Mandya on March 24 and 25.In February, Rahul visited Raichur, Bidar, Bellary, Yadgiri and Koppal districts of Karnataka.

Also Read -   Three Years of Khattar Government: Success and Failures all you need to know

CM Siddaramaiah unveiled the new flag and has now sent it for approval to the Home Ministry. Jammu and Kashmir is the only state to have a separate flag and this is Constitutionally approved under Article 370.
Seems that Congress and Siddaramaiah tactfully taking reviving Regional sentiments and tactfully putting it under use to retain its power over Karnataka Assembly.Reviving and promoting Regional sentiments may earn Congress an edge in elections against it biggest Right-wing challenger BJP.. it has potential in garnering people’s attention to Congress and creating a different angle or flavor to elections which may prove Lethal to Congress Mukt mission of BJP. However, it has chances of abrupt failure too which may cost Congress.

It can be said that Congress is employing its best-known strategies to retain its Karnataka fort and Mysore throne from a saffron hurricane.Opinion polls conducted by CHS predicts a very strong chance of hung assembly in Karnataka of 77-81 seats for Congress, 73-76 seats for BJP and 64-66 seats for the JD(S), hence providing a scope for Congress to Tactfully retain its power.However many opinion polls predict Congress to be at the Exit gate. Whatever Opinion polls or Surveys suggest, one thing can be clearly made out that the upcoming 2018 Karnataka election will prove one of the Mammoth challenge for Congress and Siddaramaiah to retain the Mysore throne.

Gujarat Assembly Elections 2012: Why is it considered as a landmark...