Agricultural/ Farm loan waiver first introduced by UPA government in 2008 is again in news particularly after the loan waiver by UP government in 2017. Since then more and more states, under the stress of farmers protests and political motives have followed the suit like Punjab, Rajasthan, Maharastra and the latest one being Karnataka. The Karnataka government has decided a partial loan waiver of about ₹ 34,000 crores in its 2018-19 budget.

Agriculture and its Current Problem – 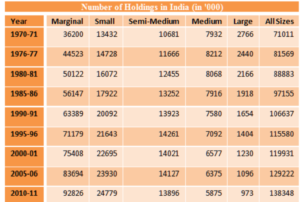 Although being the second largest irrigated country after China, about 65.3 mn hectares i.e., only one-third of the cropped area is under irrigation. It means most of the farmers are depended on good monsoon for their good harvest and when it fails, it leads to farm debt, suicides and demand for loan waiver.

Since most of the agricultural operation in large parts of India is carried by humans using simple machines like wooden plough, sickle etc. Thus a large amount of labour is involved in agriculture than required creating the situation of disguised unemployment.

The absence of agricultural markets in rural India forces farmers to sell their grains at a throw-away price to the local middlemen and traders. Thus they profit shrinks and many times they are also in the loss.

Inadequate availability storage facility provided by FCI, Central Warehouse Corporation (CWC) and State warehouse Corporations (SWC) in Rural areas force farmers to sell their grains immediately after harvest, and since prices are very low at the post-harvest time farmers are indebted in loans.

Because of lack of transport facilities and rural infrastructure, many farmers are not able to reach to the urban markets to sell their crops.

The main money supplier to landless labour and marginal farmers are moneylender, traders and commissioned agents since it is still difficult for them to take loans from the bank. These people charge a very high interest from the farmers which entraps them in a vicious cycle of poverty.

Why is Loan waiver not the solution?

NPAs in Agriculture have risen after large-scale loan waiver in India in 2008. 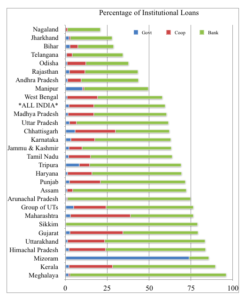 The above graph depicts the percentage of institutional loans in India. A total of average 60% loans taken farmers in India are institutional loans ( i.e., loans by banks, cooperative societies or government), also this is very low about 30% for the poor states like Bihar and Jharkhand. Thus farmers in these states will not benefit much from loan waivers.

Farm Loan waiver is only a small part of banks –

The above graph shows that agriculture loans are only a small part of banks total bad loans.

Farmer movement attacks the arguments given against farm loan waiver as Hippocratic. According to them where was this moral outcry when Manmohan Singh government in the year 2009 gave a bailout package of a mammoth amount of ₹ 3 lakh crores to Indian industries in anticipation of a possible effect of the global slowdown.

Since about 82% of all farmer indebted are small and marginal farmers, farm loan waiver is an immediate relief for them if not a solution.

Many farmers who borrow money from moneylenders will borrow money from public banks after the farm loan waiver. Thus this will help in their financial inclusion and will also have to pay less interest on their loans.

Farm loan waiving can be an immediate relief but is not a permanent or long term solution to the problems of agriculture. Also, the argument about the bailout to industries doesn’t hold water since two wrongs cannot make a right.

Read more – Is The Economy Of India Doing Better Under Modi?

A solution to the problems of farmers lies in providing cheap institutional credit at easy terms particularly to marginal and small scale farmers. The existing schemes of crop insurance, Kisan credit card, and various other incentives should be given with transparency as most of these benefits are taken by the large farmer. Also, rural infrastructure should be developed and Storage godowns should be constructed in rural areas to provide storage facilities to the farmers after harvest. At last but not the least proper implementation of MSPs should be done by the government so farmers could get their due price to maintain their living.

One thought on “Farm Loan Waiver in India: Causes, Effects and Solution”