Gujarat and Himachal exit polls 2017: Is it an encouraging sign for Congress?

Exit polls 2017 predict a victory for BJP in Gujarat and Himachal pradesh. Unlike the Opinion poll, which is conducted before the elections and asks the only opinion of the respondent, Exit Polls are conducted just after and during the polling hours. They do not ask for the opinion but asks the actual choice that voter made. Thus, they are far more accurate then Opinion polls but still carry a margin of error.

Like Opinion Polls, they too are conducted on a sample representing the whole electorate and thus are supposed the choice of very few in comparison to the actual size of voters. Exit Polls are also very speculative in nature as different agencies and News Channels tend to play with numbers and include their biases as well.The danger and folly of Exit polls were best illustrated in Lok Sabha elections of 2004 where they had predicted a win for BJP coalition but the actual picture was very different. In recent years, though we had seen improvement and in 2014 elections we had pretty accurate Exit polls. Since also we had several elections and exit polls have given pretty similar pictures to that of on counting day. Exit Polls are in conclusion are a good measure of the result to come but also should be taken with a pinch of salt. 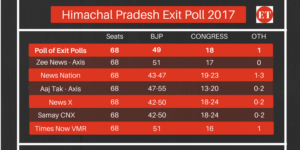 In the heat of election campaign in Gujarat, the nation had sort of forgotten that the elections were also going on in this hilly northern state. Himachal Pradesh has a history of giving chance to Congress and BJP in alternative terms. The present incumbent government of CM Virbhadra Singh was preceded by that of Bhartiya Janta Party (BJP) government led by Prem Kumar Dhumal.

Read more: Virbhadra Singh’s Government: Success And Failures All You Need To Know

The same Chief Minister candidates are on the ground once again with both parties locking their horns once more. This time though, it seems that BJP will win the race and by a hefty margin if exit polls are to be believed.
An aggregate of six exit polls gives BJP around 47 seats and Congress 20 with one remaining seat going to others in an assembly of 68 seats. This indicates that BJP will win an almost two-thirds majority in the assembly and decimate the challenge of Congress.

The more BJP leaned channels like Times Now and ZEE have gone ahead given them more than 50 seats but the number does not look far fetch with other conservative channels are also giving them in range of 44-48 seats.
The worrying sign though is for Congress as they are losing heavily in a state ruled by them and where they have a strong leader like Virbhdra Singh.

The Congress party in their defense will have the trend of state swinging alternatively in both parties but they need to see the fine lining here. Bhartiya Janta Party has retained states like Madhya Pradesh, Chhattisgarh, and Gujarat for successive terms and is looking likely to lose them, so where is Congress going wrong? 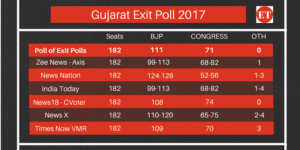 If the pundits were in any doubt of BJP losing the state of its leader PM Modi and their chief strategist Amit Shah, they are now pretty sure that’s not the case. Gujarat exit poll 2017, apart from maybe one conducted by Congress and its allies, has shown Bhartiya Janta Party retaining Gujarat with a comfortable tally of 108-113 seats. The tally is well above the halfway mark of 92 in an assembly of 182 seats. The same tally also means that BJP has taken a hit of 6-8 seats from their previous tally of 116 seats.

Read more: Gujarat Assembly Elections 2012: Why Is It Considered As A Landmark Event?

This is an encouraging sign for the Congress as it will mean that they have made inroads in the bastion of BJP and Modi. All the exit polls except one show that Congress will improve its tally and will go beyond 70 seat mark. This will come in bonus to a rejuvenated Rahul Gandhi and will be a good stepping stone for start of his presidency.
For BJP this means that Patidar agitation with slowing of the economy because of GST and demonetization has taken the toll on its vote bank. The BJP will have to take these numbers with slight disappointment and also relief that it did not take the election lightly.

In politics though, any anomaly has to be looked upon very carefully. In this case, anomaly being the News24 and Chanakya Exit polls. They are the only one giving BJP more than 130 seats and showing a decrease in Congress’s seat tally to 54. The poll tough seems a bit outstretched as channels such as ZEE and Republic which are always accused of being BJP-sympathisers has shown BJP winning a maximum of 108-110 seats.

Though the survey stands out as a sore thumb, the previous predictions of the same have been pretty accurate. This was the only survey post-2014 elections that predicted NDA winning 330+ seat and BJP forming government on its own. So the election day will decide which one of them was right.

The exit polls of both the states predict that BJP will come into power in both the states with a comfortable margin. Congress at the moment will take away the fact that a new found Rahul Gandhi has made Modi wave slow down a bit. But at the same time have to look at the loss in Himachal Pradesh as a setback. They also need to count the number of states where they have a government.

For Rahul Gandhi, only a win in Gujarat will bring joy and celebration. As losing of Himachal and only an increase of seats in Gujarat means a very bleak silver lining.

Bhartiya Janta Party though will thump their chest if they win both the states but the loudness of crackers will be determined by the victory margins. If the winning margin in Gujarat remains same as shown in the aggregate poll, BJP needs to start revising their tactic and policies of the centre for 2019 elections.