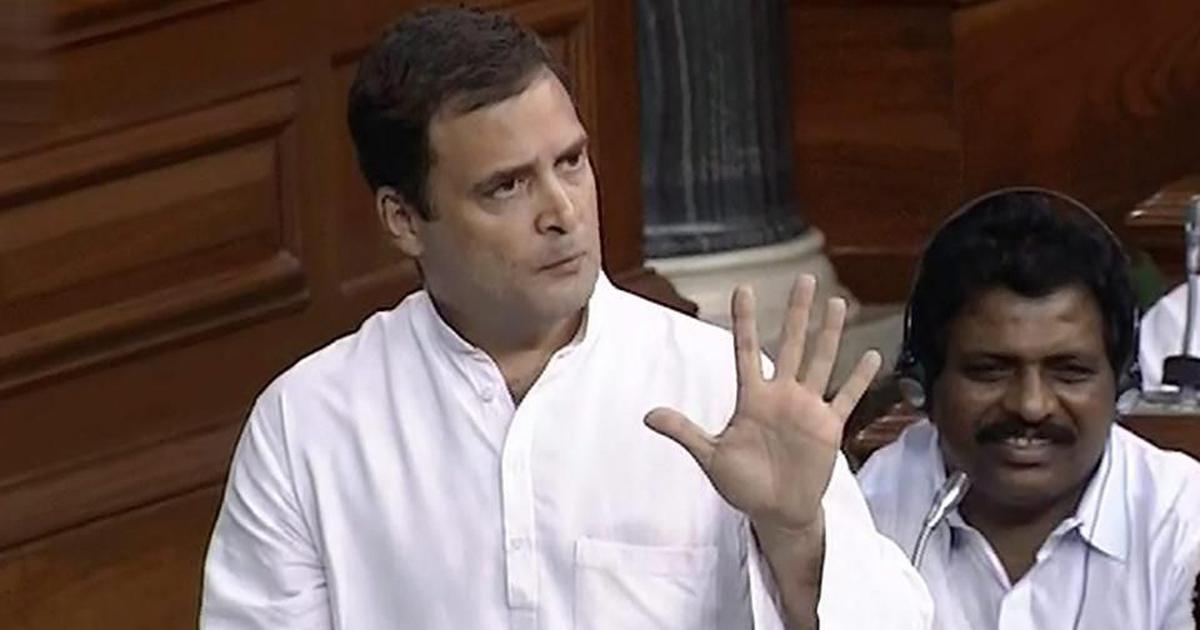 What is a no-confidence motion?

A motion of no-confidence (non-confidence motion) (alternatively vote of no confidence, no-confidence motion, or (unsuccessful) confidence motion) is a statement or vote which states that a person(s) in a position of responsibility (government, managerial, etc.) is no longer deemed fit to hold that position, perhaps because they are inadequate in some respect, are failing to carry out obligations, or are making decisions that other members feel detrimental. As a parliamentary motion, it demonstrates to the head of state that the elected parliament no longer has confidence in (one or more members of) the appointed government.

Rahul Gandhi accused PM Modi of turning a blind eye and not speaking on the problems of Dalits, Adivasis, women security and mob lynching of minorities.

Read More – What Does Winning The No-Confidence Motion Imply For BJP?

3 – Backstabbing the youth of the nation:

Rahul Gandhi accused PM of not providing the two crore jobs every year promised to the youth of the country. He lambasted the government that

China gives employment to 50,000 young people in the span of 24 hours and here mere 400 youth get job in that Amount of time.

4 – Solidarity with the people of Andhra Pradesh:

Rahul Gandhi showed his solidarity with the people of Andhra Pradesh and addressed them as the victim of “jumla politics”.

He addressed PM Modi as Jumlebaaz and accused him of having relation with powerful businessmen and working for them. He accused that a huge amount of money goes to the marketing of PM Modi. He claimed that “PM Modi is not the Chaukidar (watchdog) of corruption but a Bhagidar (participant) of it. He also accused Amit Shah’s son Jay Shah of corruption.

Through Rahul Gandhi’s speech during the discussion at no-confidence motion what Congress wanted was to target PM Modi over corruption, Lack of Jobs, ill-treatment of Dalit, women, and Minorities. It also wanted to connect itself to the people through the Lok Sabha speech for the upcoming election of 2019. Even if it would not have been able to defeat BJP in the lower house since it has a majority in it, but its objective can be fully summarized  in the words of Shashi Tharoor:

“The basic message is that journey is more important than destination. The failure of government were put before the nation. The outcome was predictable but the process was successful.”

How has the Kejriwal led government performed till now?

TDP-BJP Breakup – How will this Impact NDA Government?