Is Rahul Gandhi addicted to cocaine as claimed by Dr. Subramanian Swamy?

Congress party president Rahul Gandhi had faced a lot of controversies every now and then by the opposition party leaders. The most prominent party of making such accusations against Rahul Gandhi is BJP. It can be easily seen that BJP and Congress are two major political parties in India and the majority of seats in state and central is held by any one of these parties.

As a result of this, there is a consistent tension between the members of both parties which result in charging false allegations against each other every now and then. As Rahul Gandhi is gaining the attention of Indian citizens, he becomes the threat to the credibility of BJP. The young politician Rahul has pointed out mistakes of BJP art several instances which becomes the cause of increasing anger toward him by BJP officials. 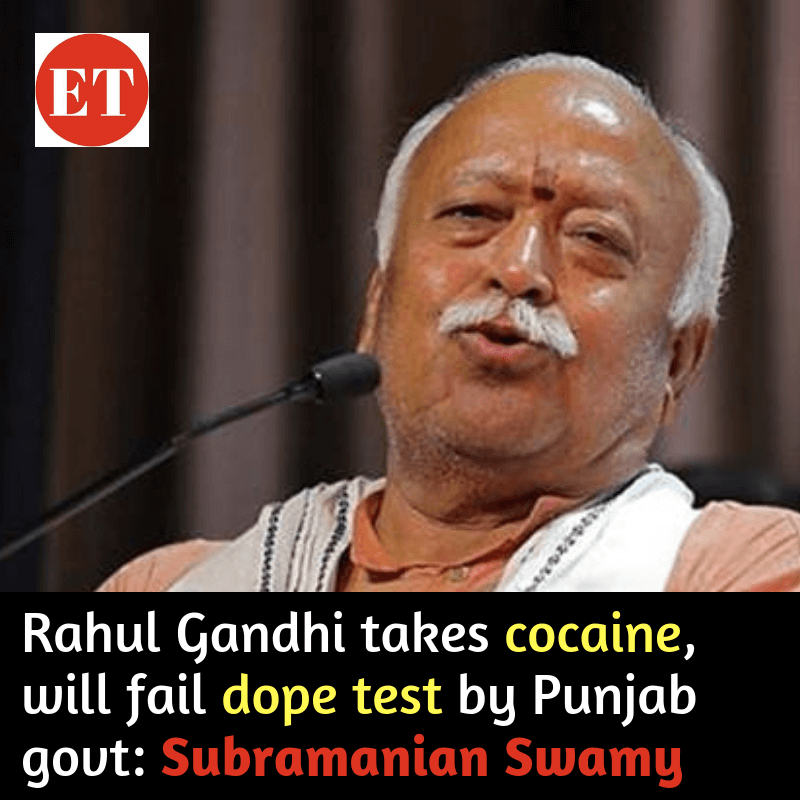 In the year 2016, a senior leader of BJP and MP of Rajya Sabha Subramanian Swamy has accused Rahul Gandhi of using drugs which turns out as a huge political controversy. Mr. Swamy has made this accusation of Rahul Gandhi drug abuse without any proof. Even though his allegation lacks any supporting fact, such criticism coming from a senior leader grabs the attention of entire media and the series of rumours started about Rahul Gandhi drugs abuse.

As Swamy blamed Rahul Gandhi without any strong grounds, this stunt shortly appears as a political agenda to destroy the image of Rahul Gandhi in of common population of the nation. Such false accusation coming from Subramanian Swamy who is also a prominent lawyer put some serious questions about the character of BJP.

While digging in the past, it is found that Swamy had accused many politicians every now and then. He has targeted the Gandhi scion repeatedly with indictments of corruption and wrong doings.

Swamy made this comment out of desperation to mock Rahul Gandhi when the cops and government servants in Punjab state were instructed to take a dope test at the time of their recruitment. He said that the Congress party president Rahul Gandhi consumes drugs especially cocaine and he will definitely fail a dope test.

But the question still remains at large that why BJP senior leaders like Subramanian Swamy made such accusation without any proof. The reason behind was Swamy’s anger toward Congress party because Congress has decided to conduct narcotics tests on state government employees in Punjab. Congress has realised that due to increasing percentage of substance abuse in Punjab, the employees are getting addicted to drugs which is resulting in their failure to fulfill their duties. Congress party has claimed that over 70% of the youth in Punjab are addicted to drugs.

In response to this request by Congress, Swamy told media that Congress should start doing the drug tests from their part itself and later accuses Congress president Rahul Gandhi of using drugs. Rahul Gandhi had decided to remain silent on this matter as this foolish act of criticism by Swamy states the demoralized nature of BJP party officials.

Rahul Gandhi drug abuse charges were never filed after the senseless eruption of Subramanian Swamy in front of media. This act somehow shows the terror in BJP about the drug test that was requested by Congress for the state government employees of Punjab. If BJP believes that the employees were clean, the party should not have any problem with the dope test. The panic and stressed response of BJP leader in this situation depicts that the party is well aware of the drug addiction of government employees in Punjab and trying to hide the fact to save itself from the humiliation.