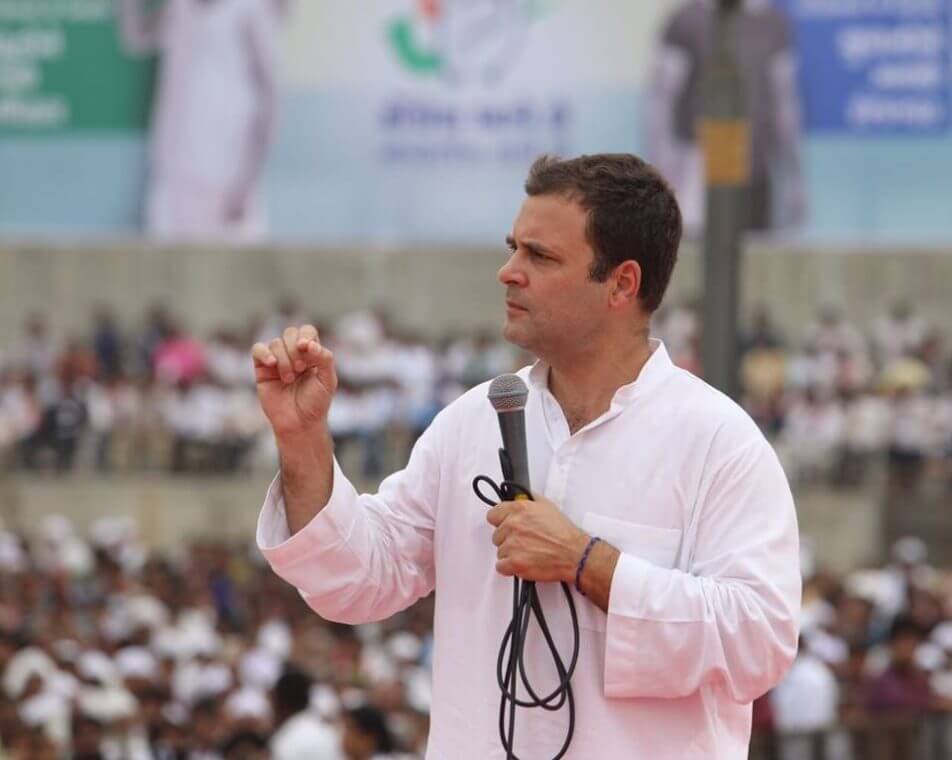 Gujarat’s assembly elections are scheduled at the end of this year. With Congress not able to win majority of the elections in recent times, Congress Vice President Rahul Gandhi seems determined to change the fortune of his party. On 4th September, Rahul Gandhi visited the state to discuss his ideas and strategies with the senior party leaders in Gujarat for the upcoming elections. Rahul Gandhi’s third visit this year in Gujarat saw a question-answer session between the party workers and the Vice President at Sabarmati Riverfront. Although, Congress is going through some rough patches, instead of focusing on Congress’s ideas and strategies, Rahul mainly focused on criticizing Modi government.

Rahul Gandhi blamed the current Gujarat government’s development policy as hollow. He said that the development plan of Gujarat benefited only few industrialists and the poor is the one to suffer. Gandhi also said that the state has been suffering because the youth, farmers and entrepreneurs are suffering. Congress, who has been out of form, has its own problems. But, Rahul Gandhi laid his focus only in degrading the opposing party’s image. It seemed clear from his answers that Congress will mainly focus on securing votes of the poor and the minorities.

He then shifted his focus on demonetization. He attacked Modi by saying that he likes other people to listen to his ‘Mann ki Baat’, but he himself does not want to listen to others’ ‘Mann ki Baat’. He said that Modi’s demonetisation has completely failed with 99% of the votes returning. He said that demonetisation has lead to chaos in the country and its primary purpose of bringing back the black money is not fulfilled. Demonetisation has damaged businesses of small and medium industries. Also, GST has not been significantly a positive change according to the Congress Vice President. He compared the GST plan of BJP and Congress. He said that Congress planned to make GST 18%, which is favourble to every group in the country, but BJP’s 28% GST suits only higher class people of the country and that the poor has to suffer. Blaming the BJP government in Gujarat for failing to promote small and medium enterprises, he said that traders in the state would be able to fight off competition from China if they were given benefits similar to the incentives doled out in favour of some big corporate.

Also Read -   Why is Congress losing its ground in India?

Rahul Gandhi said that he was confident that the party will make a comeback this year. Congress was given a blow when several veteran Congress leaders left the party and joined their rivals BJP. Shankarsinh Vaghela, one of the senior most leaders of Congress has recently joined BJP. Ahmed Patel’s win in the Rajya Sabha might have given Congress some confidence. Even though some leaders left, Ahmed Patel’s win in the Rajya Sabha gave BJP some sleepless nights. Party has finalized the slogan “Congress aave che- Navsarjan Gujarat”.  Rahul promised development of small and medium enterprises, hike in minimum support price for farmers, handing over of allotted land to Dalits, creation of jobs for youths, filling of government vacancies and a change in the education system if the Congress is voted to power. He claimed that development in Gujarat had not reached the Dalits, tribals and the poor.

Given the answers by Rahul Gandhi, Congress’s policy in the Gujarat elections again seems of gaining the votes by undermining the opposing party. They seemed to be focusing on gaining the votes by advertising the failures of GST and demonetization. Congress is likely to focus on the minorities and Dalits. They seem to strengthen their seats by securing the votes of the farmers and the poor. Rahul will again visit the state on 22nd September and is planning a week long yatra from Dwarka in west Gujarat to south, central and east Gujarat. BJP, on the other hand will start the campaign under the guidance of Amit Shah and will look to continue their dominance in the state.

Also Read -   All you need to know about Indira Canteens

Sidhu-Bajwa Hug: A threat to Congress Party and Nationalism?

Why Indian Rupee is failing against US Dollor