Madhya Pradesh as a state has never been in the spotlight for better or worse. The scenario though has changed in recent years, starting from Roads better than Washington remark by Chief Minister Shivraj Singh Chouhan to Mandsaur violence. It has attracted much news minutes recently and will do more as state elections come nearer and political tension rises in the state. For all the attention it will get, much of it will be focused on CM Shivraj Singh Chouhan, a leader from the humble beginning looking to become CM for the 4th time in a row.

CM Shivraj Singh Chouhan has been one of the leaders, who do not get much attention in the national airtime but is a force in regional politics. Having started his political career in the turbulent years of Emergency, Shivraj Singh Chouhan has covered long way to being three-time Chief Minister. He took his first steps towards a political career during the emergency.  JP movement inspired him as a teenager and he got involved in the underground movement of resistance. He helped the underground leaders during the emergency to stay hidden. For his efforts in the movement, he carries weak knees a reminder of his time behind bars after getting caught.

He was already a leader in school and joined Rashtriya Sayamsevak Sangh too. Like many leaders of Bhartiya Janta Party, Shivraj Singh Chouhan to has toiled his youth years in RSS. This association with RSS and his years of working within the organization has helped him numerous times in his career in BJP. His first big break came in the student wing of RSS, ABVP. Following emergency years, Shivraj Singh Chouhan became an active member of the wing and soon was elevated to the post of Pradesh Mantri in 1984. This promotion was followed with elevation to Mahamantri and then President of ABVP in Madhya Pradesh in 1988. His years in student politics were just a platform for greater thing for him. He impressed senior leaders with successful organizing “Kranti Mashaal Yatra” in 1988 and was up for his debut in 1991 elections. 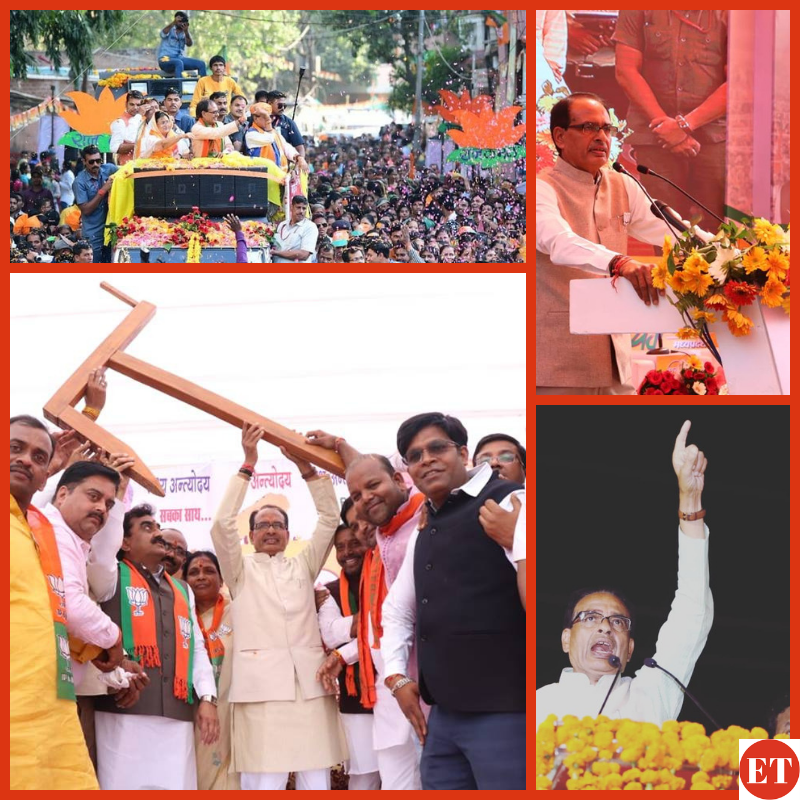 A Gradual rise to the top –

Riding on his popularity inside the party and outside, he was given the seat of Budhani in the 1990 state assembly elections. He won the elections with a comfortable margin of 22,000 votes but then soon left it for Lok Sabha seat of Vidisha. The seat was vacated by Atal Bihari Vajpayee then and now is represented by Minister of External Affairs Sushma Swaraj. He won three consecutive elections from the seat in 1994, 1998 and then added the fourth one in 1999 as well.

During all this he was also scaling ranks in party ranks, he was made the general secretary of Bhartiya Janta Yuva Morcha in 1992. He impressed with his work in the organization and in parliament committees such as Urban and Rural Development, Human Resource Development, Hindi Salahkar Samiti and Labour Welfare. In the year 2000, he became the President of BJYM and also National secretary in BJP. His work was getting noticed which resulted in him being made the chairman of House Committee (Lok Sabha).

Rise to the Chief Minister –

His biggest success though came as Madhya Pradesh witnessed a turbulent situation after BJP won the 2003 state elections. BJP had fielded Uma Bharti, a fiery and very strong leader as its Chief Minister candidate in the 2003 campaign. Uma Bharti with her attacking strategies and development agenda swept the elections. She de-throned the 10-year-old Digvijay Singh led Congress government. The win was the starting point of 16 years domination of BJP in the state and decline for Congress. Uma Bharti though soon found herself in the eye of a storm. After she was named in 1994 Hubli riot case, Uma Bharti found herself cornered and out favor. After allegedly falling out of favor with LK Advani and top brass of the party and also state RSS. She was ousted in 2004 and replaced by Babulal Gaur.

Babulal Gaur, a veteran leader of BJP remained in power for a year as the caretaker Chief Minister. His tenure though was not so impactful and controversial. In the months that followed, BJP and RSS looked for a dependable candidate and Shivraj Singh Chouhan’s name came up. He was liked by both RSS and LK Advani camp, something he still enjoys. Shivraj Singh Chouhan thus became the 17th Chief Minister of the state and has been incumbent since 2005.

Also Read -   AAP Government performance review: How much will you rate Kejriwal Government in Delhi?

Shivraj Singh Chouhan has just settled into his Chief Minister office when the election of 2008 arrived. It was his first test as chief minister and an important one also. There were questions in the party and outside whether he can be a leader. The question had its root in the fact that in the 2003 election. In 2003, it was Uma Bharti who was the leader and not Shivraj Singh Chouhan. To compound on this problem, Uma Bharti had rebelled and formed her own party. This with anti-incumbency sentiment seemed too much for a leader fighting his first election as Chief Minister Candidate.

Shivraj Sinch Chouhan though proved everyone wrong. He came out campaigning himself all around the state. He traveled to every constituency and built an image of a leader with strong grass root holding. It was during this time, where he got his name as “Mamaji”. He unleashed his schemes targeting the female voters and built a strong following between them. While the Congress was fighting a fraction war which continues till today, Shivraj Singh Chouhan united the BJP. The biggest problem coming into the election was going to be the rise of Malwa leaders in the party. Kailash Vijayvargi and Laxman Singh Gaur were rising in stature and had RSS backing with them.

Despite all this, Shivraj Singh Chouhan held his ground and built his image as a clean and household leader. This became his Mantra and won him the elections with a comfortable margin of 143 and limiting Congress to 71. Though the Congress came back strongly after dismal 2003 results it was not enough.

Will you vote him even for the fourth term, participate in our Madhya Pradesh Opinion Poll and let us know who will win the upcoming MP assembly election.

In his second tenure, Shivraj Singh Chouhan became more and more popular among the people of MP. His social policies focusing on women had him being called “Mamaji”. Economically too MP was recovering from the BIMARU tag and cities were beginning to become the bastions of BJP in the state. This trend was to become more clear in the election of 2014 which had its shadow on the state assembly.

Coming into 2013 elections, there were strong rumors inside the party of Shivraj Singh Chouhan being named as the alternate to then Gujarat Chief Minister Narendra Modi as parties Prime Minister candidate. This backed by him having a similar track record or even better one as he came with no issues with minorities. Nitesh Kumar was also a big factor in the NDA back then and keeping allies was seen as a must. Shivraj Singh Chouhan also had the backing of LK Advani inside the party which boosted his chance over other candidates.

At the state level, he was looking clear to retain the lead over the Congress. His biggest obstacle was not Congress but rather VYAPAM which had dented his government image a bit. Congress was still fighting within itself and looked broken. Shivraj Singh Chouhan again toured the whole state and “Mamaji” was riding his popularity into the elections. BJP was winning the elections according to all and it did win with 165 seats. The elections were seen as the semi-final of 2014 elections and in hindsight they were.

All speculation regarding Prime Minister candidate was also put to rest after the result as Shivraj Singh Chouhan himself declared Narendra Modi as his leader. The comparison ended there and BJP was left with 3 states and a clear-cut PM candidate. 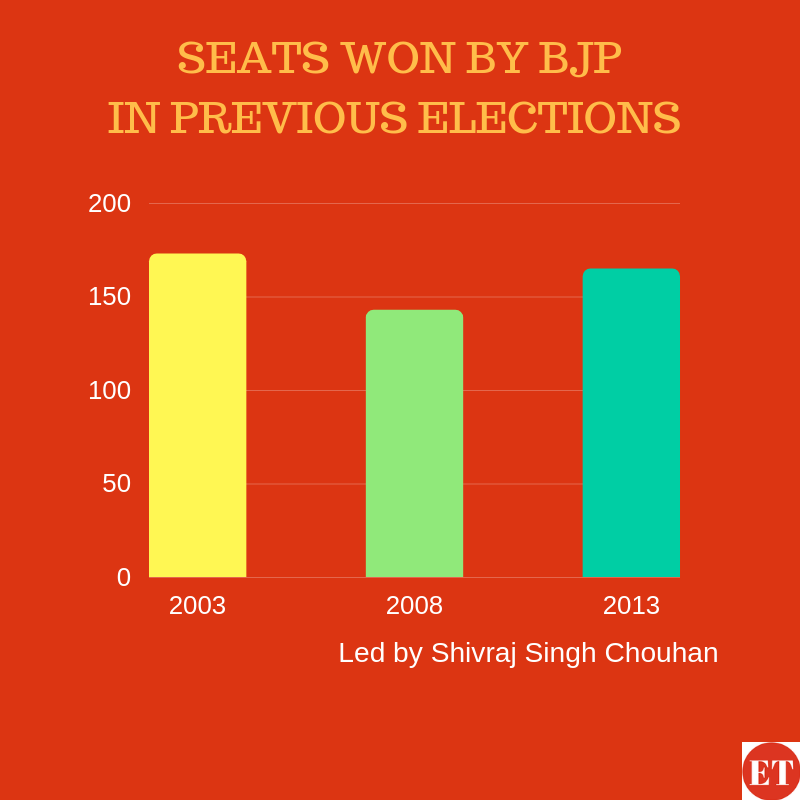 This time around too, the elections are touted as the semi-finals of 2019 elections. BJP is looking to retain its stronghold and fighting incumbency like in the center. Congress has put its house in order under Rahul Gandhi but the undercurrent of fractions looms large. They are shown as the favorite in a couple of opinion polls but Shivraj Singh Chouhan still remains the choice for Chief Minister. The situation is quite similar to the national picture.
BJP is targeting a tally better than that of 2003. This would give them confidence going into 2019 and decimate all doubts over corruption charges leveled by Rahul Gandhi. It would also validate their stand of numerous controversial issues since UP elections at least in the Hindi heartland.