Why State Election results 2018 are not Congress’ win but BJP’s loss?

In 2014 Lok Sabha Elections, Bhartiya Janta Party achieved an absolute majority with 282 seats out of 543 and become the largest political party of India ending the Coalition era from 1989.

But recent state elections have a different story to tell. The results of elections in five Indian states saw a dramatic change in the country political map. BJP lost its three main states to Congress. BUT, it’s a Congress win or BJP Loss?

The results of assembly elections in five states this year– Chhattisgarh, Madhya Pradesh, Rajasthan, Mizoram, and Telangana–showed NOTA registering around 8.44Lakhs votes. Many candidates in this assembly election have lost and gained the win with a little margin of votes like 500 to 1000, which clearly shows that how NOTA has affected and benefited the candidates.

In Madhya Pradesh, BJP had to face defeat even after securing 47,827 more votes than Congress(which has formed the government in the state).In terms of percentage, BJP’s vote share was 0.1% more than theCongresss, yet it won 109 seats, 5 less than that of Congress i.e 114 seats. 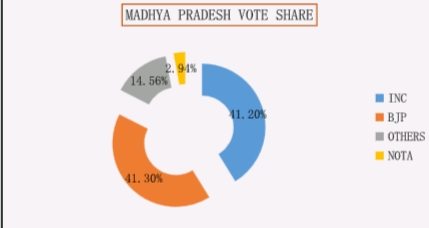 So, why this happened?

First, Congress won more seats with smaller margins than BJP.
Second, Rise of other regional parties.
Third, some voters(who didn’t support either Congress or BJP) chose NOTA.
No Doubt, NOTA was the game spoiler for BJP and played decisive role in state election.

Archana Chitnis lost in Burhanpur to an Independent candidate by 5,120 votes while 5,726 votes went to NOTA. 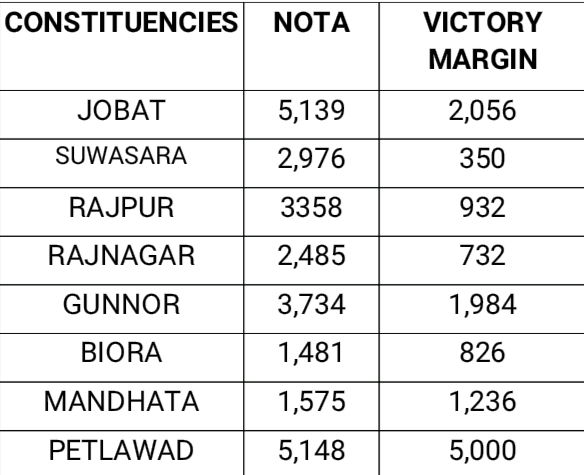 Even In Rajasthan assembly elections, at least 15 constituencies polled more NOTA votes than the victory margin of winning candidates.
Votes Polled as NOTA could have yielded 7 to 8 more
Seats to either the congress or the BJP.

Mizoram had remained the Congress’ last bastion in the Northeast, which It had lost not to BJP but Mizoram National Front. Since 2016, Congress had lost Assam, Manipur, Arunachal Pradesh, Meghalaya, Nagaland, and Tripura to BJP and its allies.
(well, Congress lost all its bastion in Northeast. It’s CONGRESS MUKT NORTHEAST, at least BJP’s this dream come true.)

Even in Telangana, It’s the regional party who has come out with flying colours. So In 2019, Regional Parties might play key roles for which Non-BJP already attempting to put united front against PM Modi’s bid for a second term.

No doubt voters taught the lesson to BJP because of its arrogance, misgovernance, SC-ST and Cow politics. However, for Congress, victory came as a new life and many new challenges.

New life, because the position of the party’s president Rahul Gandhi will be strengthened, he will become more acceptable to other opposition leaders, This victory will help them prepare for the 2019 election. Challenges, because it won on the promises it made to farmers. Now, Congress has to fulfill them.

So, the results of these five elections are going to bring many changes to future politics. It’d be interesting to see that how BJP is going to deal with its major threat–NOTA.