What does winning the No-Confidence Motion imply for BJP?

The No-Confidence Motion in the monsoon session of the Parliament was finally accepted by the Speaker this time around after attempts to introduce this during the Budget Session were stalled due to disruptions. This was the 27th no-confidence motion since Independence and what does winning the no-confidence motion imply for BJP?

The concept of a no-confidence motion is one of the strongest mechanisms in our democracy to keep a check on the ruling party if not satisfied and is therefore of high priority. Due to this mechanism, Deve Gowda, Vajpayee and VP Singh have been removed from the post of the Prime Minister. 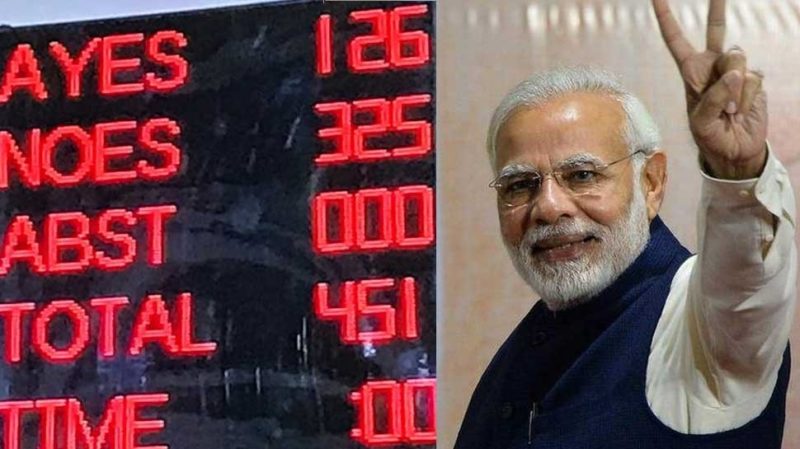 What does the No-Confidence Motion in Parliament signify for the BJP? Will winning it determine the future of the party in the 2019 elections or are tough times ahead for BJP?

What is No-Confidence Motion?

Our Constitution suggests according to Article 118, that both the houses of the Parliament are free to conduct their own business. A no-confidence motion is part of the Rules of Procedure and Conduct of Business of the Lok Sabha. It is generally moved by a member of the Parliament (MP) against the ruling government if according to the MP the government’s activities have not been satisfactory. If the motion is accepted and passed the resignation of the government is demanded. For it to be passed, once introduced, a debate on the motion takes place only if 50 or more MPs rise in support of it. At the end of such a debate, the motion is finally put to vote. In simple terms, the government is no longer deemed fit enough to continue its term. The no-confidence motion which was accepted after 15 years, the last one being during Vajpayee government in 2003 in which the ruling government comfortably defeated the Opposition. 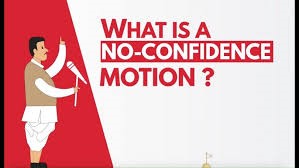 How did the No-Confidence Motion come around?

Even during the Budget session, the Telugu Desam Party (TDP) and the YSR Congress Party (YSRCP) wanted to submit the notice of no confidence against the BJP. But due to constant disruptions, both the houses of Parliament were adjourned indefinitely during which many parties had protested – TDP and YSRCP demanding special category status for Andhra Pradesh, AIADMK over the Cauvery issue, BSP and SP over the SC order on dilution of the SC/ST atrocities Act etc.

During the Monsoon Session 2018, the TDP MPs – Srinivas Kesineni, Thota Narasimham and K Narayan Rao sent their notices electronically and then gave the formal letters. Officials also claimed that MPS of the YSR Congress Party (YSRCP) submitted the notice of no-confidence before others during their budget session. But this time the TDP MPs were the first ones to do so.

Read more – Modi Government: Here Is How It Has Performed Till Now!

In this case, due to first-come-first-serve basis, Srinivas Kesineni’s notice was accepted very promptly by the Lok Sabha Speaker Sumitra Mahajan and the debate was slated for the Friday merely three days after the Monsoon session started. It was clearly observed that the Congress asked for the debate within 10 days, indicating their unpreparedness. The fact that the debate was scheduled so early stumped them. But they tried to put up a fight.

The ruling party which enjoys a majority in the Lok Sabha with 273 members and the support of allies could easily win the No-Confidence motion. Out of the total 451 sitting MPs, the BJP got the support of 325 while 126 backed the motion giving them the win.

But, the events which led to the win need to be highlighted.

The ‘Special Case’ of Andhra

The fact that TDP was the first one to file the motion will allow the TDP to take a leadership role in the Opposition Alliance against the BJP. This is a stance completely in reverse of what happened in 2017. Let us understand the issue in detail.

With special category, status comes benefits and financial assistance to the states which is the reason for the push. But there is a certain criterion to award SCS. They are –
1) Hilly terrain;
2) Low population density and/or sizeable share of tribal population;
3) Strategic location along borders with neighbouring countries;
4) Economic and infrastructure backwardness &
5) Non-viable nature of State finances.

States like Uttarakhand, Jammu and Kashmir and several North Eastern States fall in this category and rightly so because of the sensitive areas they are located in and the tough social, economic and political challenges which they face. But, this is not the case with Andhra Pradesh.

In the case of Andhra, they are asking for a special status because the bifurcation of Andhra Pradesh gave rise to a revenue deficit since Hyderabad which housed several companies and industries went to Telangana. With the GST taxation in place, the more it seems redundant to have a special status since there will be a vast increase in the transfer of revenue to the State government from the Centre and not forget the special economic package which they received. Hence, the demand for SCS seems more of a political reaction to the pressure TDP faces in its home state from YSRCP.

Like he did in 2013, the TDP is following the same steps trying to make a villain of BJP like it did of Congress but with only 16 MPs and no support from its own neighbours, it does not stand any ground.

In March 2017, the Andhra Pradesh Assembly passed a resolution thanking the Centre for approving a special economic package for the state. Let us now slightly rewind to 2014. The BJP in its election manifesto in 2014 had promised Special Category Status to Andhra Pradesh for a decade if it came to power and that is when TDP readily became an ally to the BJP in defeating the Congress which had orchestrated the Andhra divide and had nothing for the State.

Come 2018 all the dynamics have changed. Naidu has taken a U-turn from his 2017 position and is once again demanding the SCS. While it is true that the BJP has not kept its word, Chandrababu Naidu too is guilty of not having pushed hard owing to the elections next year and the pressure from others like Jaganmohan Reddy and Pawan Kalyan. The case of Andhra however, had been instrumental to push for a No-Confidence Motion.

How did the political parties react to the No-Confidence? 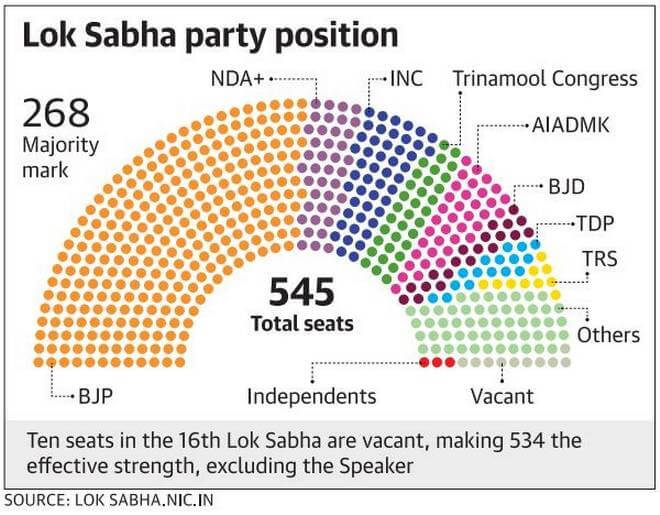 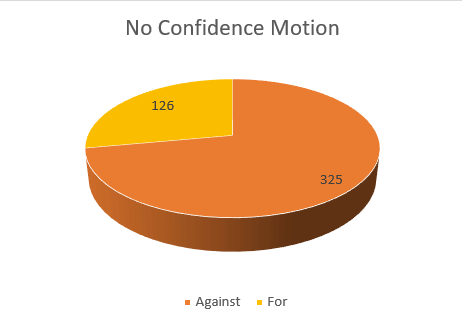 BJD chose to stage a walkout rather than sit in the house and vote as they believed no national party had worked for development in Odisha. Shiv Sena and BJD were the only parties who did not vote.

The highlight of the 12-hour-long debate was the speech by the Congress President Rahul Gandhi whose focus was on the Rafale issue, the ‘suit boot’ government and the other issues. He also mentioned how the President of the BJP and the PM cannot afford to lose their power simply because once off other processes will start against them indicating to the other parties and the people of how they cannot afford to re-elect the leader because of his wrongdoings. But after his speech, he immediately went towards the PM and hugged him. His act might have been unparliamentary as pointed out by many including the Lok Sabha Speaker but it sure seemed that Mr Gandhi was trying hard to look the part of a compassionate leader. 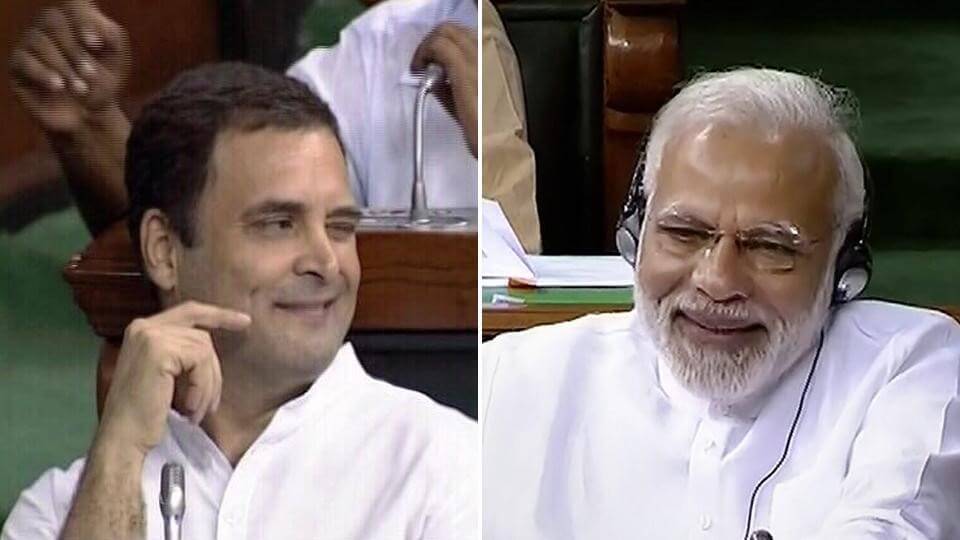 Modi, on his part, used his speech to reach out to potential allies and spoke kindly about JD (S) chief Deve Gowda, praised the stance of TRS, SP founder Mulayam Singh Yadav, and even NCP Chief Sharad Pawar – a signal that the BJP was viewing regional parties for 2019. In his speech, PM Modi also focused on what all his government had achieved in terms of the GST, Triple Talaq law, and the others. Except for strong jabs at the Congress as well as TDP but apart from that, he did not answer the questions posed to him as well signalling that although BJP might have won, it wasn’t Modi who saved the day.

Also Read -   What is the Relevance of Caste in Politics?

What does this No-Confidence motion by the Opposition imply?

So, what does this mean?
It is a given that the Opposition does not have enough numbers in the Parliament. The Single largest party in the Opposition – Congress has only about 48 seats. Yet, the Opposition pressed for the No-Confidence motion because they probably hoped to use the opportunity of the no-confidence motion to showcase their inter-party unity and attack the ruling government over various issues like Demonetisation and GST which have impacted the small businesses, the hate crimes and lynchings plus the violent attacks against the Dalits and the Women which have become the order of the day, collapse of the banking order, lowest economic growth with agricultural growth also witnessing a low down, ‘diplomacy failures’ despite the PM’s travel to 84 different countries claim the opposition.

Election 2019 Poll: Who Will Be The Next Prime Minister Of India?

The no-confidence motion is a stunt pulled by the Opposition now to ensure that people also endorse the opposite stance by registering their no-confidence with the government in the next general elections. But, the fact that there were 9 notices for no-confidence indicates that there was no coordination between them which might not go down well for 2019 elections.

While for the BJP, the win might have come easy they need to watch out for the upcoming elections this year which will have a say in their continued strength in the Lok Sabha. The opposition might unite to bring about its downfall. The Congress, the largest Opposition did not seem too prepared but they have strong chances of winning power in the upcoming State Assembly elections. Putting the No-Confidence Motion at the start of the session ensured that this session will not end up like the previous one. The government can now go about its business. Many important Bills need to be discussed like the Triple Talaq, Insolvency and Bankruptcy Code Bill etc. But, they need to watch out.

The BJP may have sailed through this No confidence vote giving them the upper hand but this showed that the run-up to the 2019 elections has officially started and the ruling, as well as the Opposition parties, need to strategize effectively to ensure a win. The game is not set for 2019!

One thought on “What does winning the No-Confidence Motion imply for BJP?”