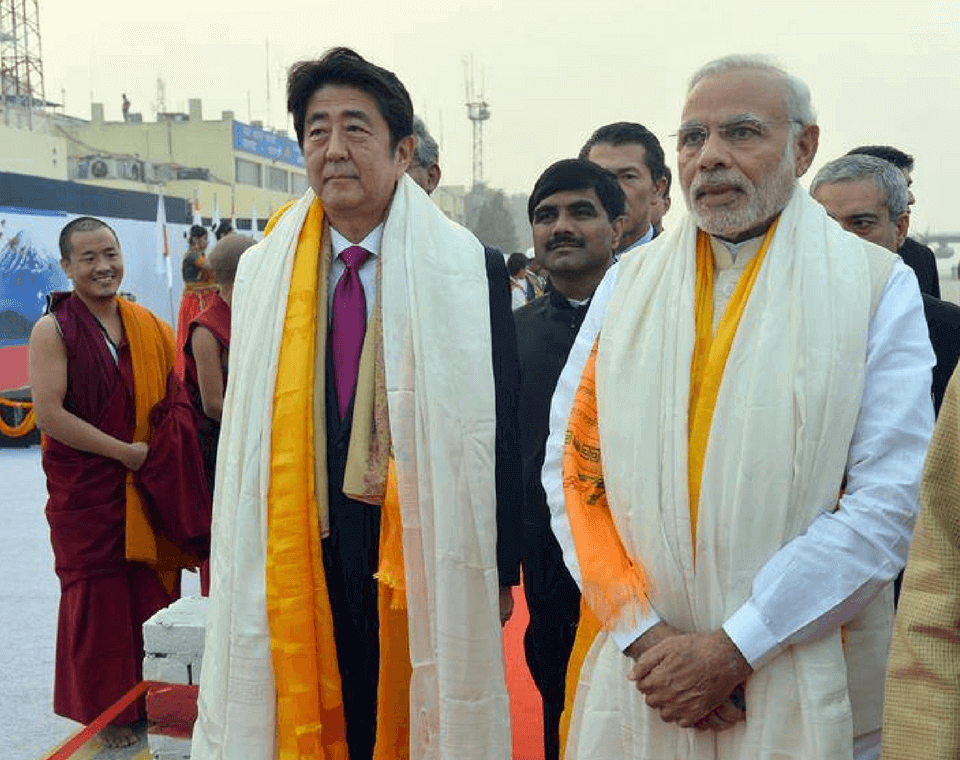 Japanese Prime Minister, Shinzo Abe visited Ahmedabad on 13-14th September along with PM Modi. Shinzo’s visited India for the ground breaking ceremony of high-speed rail network between Ahmedabad and Mumbai. Apart from the rail project, the two leaders also laid the foundation stone for a dedicated industrial township for Japanese during their visit. More than 10 MoUs between Japanese and Indian delegates were signed then. The two leaders also paid visit Mahatma Gandhi’s Sabarmati Ashram in Ahmedabad. Ahmedabad and Gandhinagar were neatly decorated for the visit of the two PMs. However, a logical question arises in mind that why Shinzo Abe was not invited to the country’s capital, Delhi and why Gujarat was selected? Is it because the BJP is eyeing the upcoming assembly elections in Gujarat at the end of the year? Was it a poll campaign by the BJP? Will it affect the result of upcoming gujarat election?

It is very rare that the Prime Minister of any country visits India’s other states before Delhi. This fact itself shows how important the Modi-Abe visit will be for BJP as far as the upcoming Gujarat election is concerned. Also, Modi visiting the state when elections are so close points directly to the point of campaigning for the poll elections. Congress and other rival parties took this as an opportunity and started blaming Modi for using the bullet train project to assist BJP in Gujarat elections.

BJP suffered a major setback in the Rajya Sabha elections recently, when they failed to land all three BJP members to the Rajya Sabha after being defeated by veteran Congress leader Ahmed Patel. These elections rang an alarm bell in the BJP. However, Shinzo Abe’s visit to launch bullet train exactly before the elections seems to be a master plan from Narendra Modi. What has caused more controversy is the timing of the announcement. Narendra Modi is famous for announcing big schemes and projects just before major elections and this project adds to the list.  After 22 years of relentless power in Gujarat, the BJP seems to have exhausted all its rhetoric, nor does it have the much-needed Modi as the chief minister to present his creatives year after year. This, when it needs Modi — and his art — the most with the first crucial assembly election in his absence less than three months away.

However, this step by BJP might prove to be counterproductive too. With bullet train’s budget to be around 1.10 lakh crores, it will break the Railways’ budget. With many train accidents taking place in the last few years, it seems a questionable decision by the Modi government to invest this much amount of money on a single project. The priorities of the government can also be questioned as they kept bullet train’s project over the safety of the public. Renovation of the railway lines and railway technologies are of major concern right now and investing in bullet train at this time has raised a few concerns.

Congress, who is desperate to make a comeback in Gujarat, was furious with this strategy of the BJP. The Congress took opportunity and blamed Modi for breaking the railway budget. Also blaming him for using the UPA started project for the Gujarat election campaign and that it is always the strategy of the BJP to fool people before the upcoming elections. Congress, who is out of power for 20 years in Gujarat, also blamed Modi for paying frequent visits to Gujarat before elections. A Congress party official said the way in which the BJP was targeting the Congress in Gujarat showed that the ruling party was on the back-foot. He said that the recent Rajya Sabha results had given a fresh lease of life to the Congress and that the party was now hopeful of winning the state elections. However, the Congress was also wary that being overly critical of development projects could further dent its image among the voters. “We are not against development. But the PM always links it to polls,” Kharge said.

Only time will show how the visit of Shinzo Abe and Narendra Modi to Gujarat will affect the results of the elections in the state. Gujarat people seem to be happy as their state was chosen for the first bullet train, but however some people are not happy with the government’s recent performance. If this step leads to victory of BJP, it will be considered as one of the most epic step by Modi.

Gujarat and Himachal exit polls 2017: Is it an encouraging sign...

Rahul Gandhi vows to make a comeback in Gujarat elections