Women’s Reservation Bill: Does it abide by our democratic values?

Congress president Sonia Gandhi wrote a letter to Prime Minister Narendra Modi, requesting him to make use of the NDA’s majority in the Lok Sabha to pass the long-pending Women’s Reservation Bill passed by the Rajya Sabha in March 2010 and assuring him of Congress’ support to the legislation. 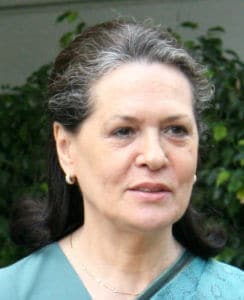 In the letter to Prime Minister Narendra Modi, she reminded him of the landmark Women’s Reservation Bill and asked him to pass the legislation, which she said has been languishing in Lok Sabha “for one reason or another”.

The Women’s Reservation Bill was first introduced in the Parliament in 1996 by the H.D. Deve Gowda government, but no government has effectively passed it yet. The existing version of the bill, the 108th Amendment, envisages 33 per cent reservation for women in the Lok Sabha and all state legislative assemblies. For reservation in the Lok Sabha, one-third of all constituencies will be set aside for women on a rotational basis, such that a constituency will be reserved for one general election and not reserved for the following 2 elections.

Sonia reminded Modi that the Bill has already been passed by the Rajya Sabha on March 9, 2010, when the Congress-led United Progressive Alliance (UPA) was in power.

The letter coincided with reports that the Modi government was mulling the option of pushing the women’s reservation bill.

The Congress president even pointed out in the letter dated 20th September that it was the Rajiv Gandhi regime that “first mooted the provision” of reservation for women in panchayats and municipalities which the opposition parties “thwarted” in Parliament before it was passed during the Narasimha Rao regime.
Sonia Gandhi said the bills were “thwarted” by the opposition in 1989, but were passed by both the Houses of Parliament in 1993.

Also Read -   Where is Delhi Heading in the Fight Against COVID19 ? 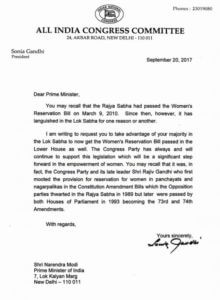 In May this year, the Congress’s women’s wing, Mahila Congress, had also launched a signature campaign seeking early passage of the Women’s Reservation Bill in Parliament. The campaign was launched by Sonia Gandhi on the occasion of the 26th death anniversary of Rajiv Gandhi at his memorial Veer Bhoomi in New Delhi.

Mahila Congress president Sushmita Dev backed up Gandhi by leading a pack of party’s women leaders to address a press conference to demand passage of the bill while recalling Congress’ commitment to the cause of women.
She asked Modi to assure the country’s women that the reservations would be implemented before 2019 when the next general elections will be held.Dev, who read the letter out to reporters at the briefing, said, “The question we ask Modiji after three years of the BJP coming to power is; why the delay?”
Another Congress leader, Shobha Oza, seconded Dev and said the party had collected “lakhs of signatures” from across the country and those would be submitted to President Ram Nath Kovind while pressing for the demand.

How can the Women’s Reservation Bill affect the parliament now?

The Narendra Modi government is now likely to bring the much-delayed Women’s Reservation Bill in Lok Sabha for discussion in the Winter Session of Parliament.Finance Minister Arun Jaitley met a few senior Congress leaders (Ghulam Nabi Azad, Ahmed Patel and Motilal Vora) on Thursday evening to discuss the issue a day after the letter was addressed.

Is the Women’s Reservation Bill a good idea for democracy?

Sonia Gandhi described this as “significant step forward in the empowerment of women” and unsurprisingly, the demand has generated some enormously good coverage and many commentators have urged the Prime Minister to heed and follow Sonia Gandhi’s advice. Why would anyone, not be in support of a Bill that encourages women’s participation in politics? After all, the percentage of women in the Lok Sabha has gone up by only a small margin from 4.4% in 1951 to 11% in 2014 and at this pace, it will take another 180 years to reach the gender balance that the Bill seeks to create.

Also Read -   Was Demonetization a success or failure?

But in our quest and urgency to rectify this serious problem of only 62 women in the Lok Sabha which is a very depressing number, are we moving forward by using a wrong approach? Do we really need a law that discriminates against individuals on the basis of gender? Are we right in forcing voters to choose between men & women rather than pushing them to vote on how meritorious the individual candidate is? The solution often matters as much as the real problem and the solution here—the idea of quotas for women—suffers from serious flaws and limitations.

But some have their own reservations regarding the Women Reservation Bill. The opponents of the bill promulgate that reservation would only continue the gender inequality and not solve it. Another key apprehension of the opponents is that such a reservation will singularly fill up the Parliament with wives and daughters of those ill-fated politicians whose constituencies fell under the reserved category that year.

Do we really need to empower women by making men just a stepping stone? Reservation of any kind hampers the idea of democracy. And if the bill focuses on gender equality, why doesn’t it reserve 50% seats? Why only 33%? Feminism is not about empowering women by snatching rights of men but equalizing both the genders in every sphere and the bill is against the thought.

The bill tries to tackle a serious problem through a supposedly morally superior way but instead, hurts what we should care about the most—our democracy. This is fashionable or morally correct rather than logically correct. Women should be treated as individuals allowed to pursue what they want and voters should have the freedom to choose their representatives. That is what a real, strong democracy looks like.