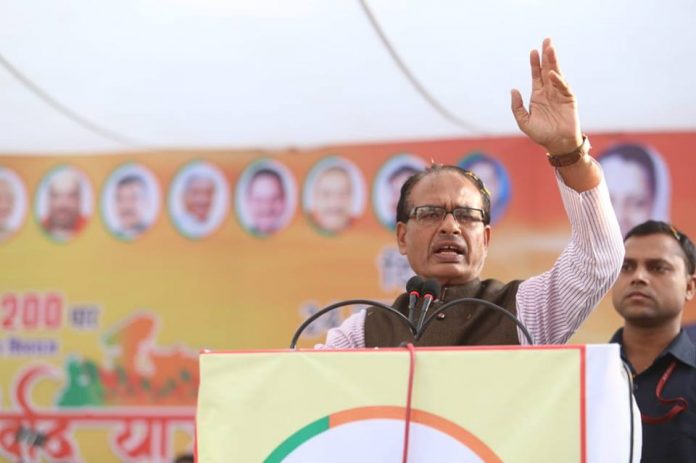 CM Shivraj Singh Chouhan has overseen many changes in the state of Madhya Pradesh. His streak of two straight wins in elections is the testament of that. Or does it point towards the fact that previous Congress was not up to the mark? Digvijay Singh, now sidelined in Congress, was at the helm of Madhya Pradesh at some time in the early 2000s. BJP has since had made it a bastion. A big reason for that is the policies of Shivraj Singh Chouhan.

Madhya Pradesh was part of the BIMARU states. The state’s electricity infrastructure and roads were in shambles. Even the big cities like Indore, Bhopal, and Gwalior was subject to power outages of over 3-4 hours daily. The state was reeling in debt and had very low agriculture growth rate. Then the BIMARU state elected BJP on the agenda of development and subsequently, Shivraj Singh came at the helm.

For Shivraj Singh Chouhan, it has been all about infrastructure development for over 10 years now. His first term was very short with just 3 years left before next elections. His most successful years have come under his second tenure. For the last term, Shivraj Singh Chouhan has focused more on implementing schemes of center and his pet project, Narmada Canal. In his achievements, he also boasts of successfully organizing the Kumbh in Ujjain. 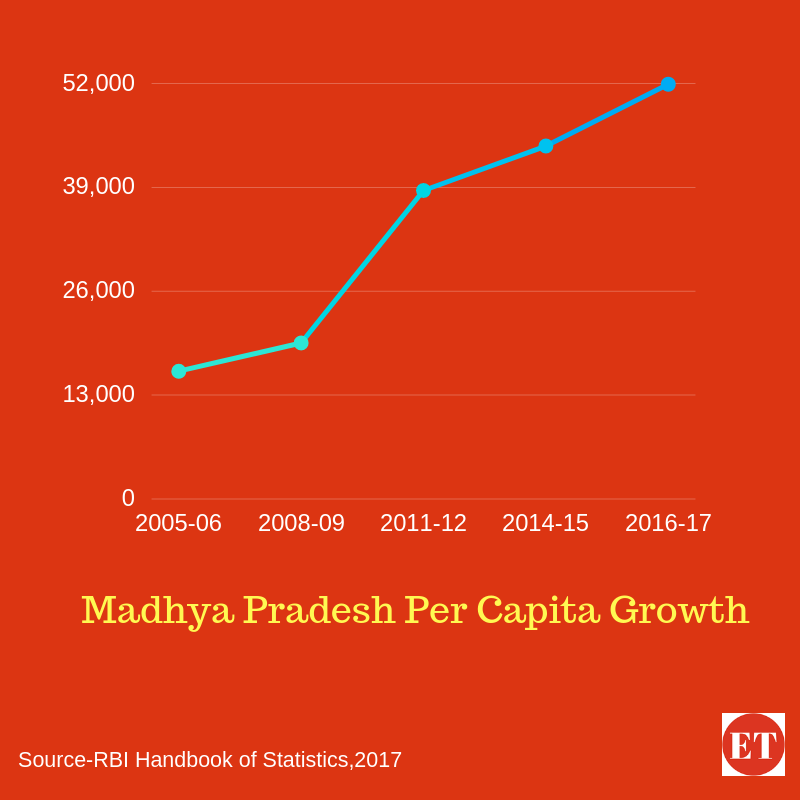 Shivraj Singh Chouhan has always come out in the public as the Mamaji who worked for the poor and farmer. Over his last three terms, he has got enough time to implement his schemes. His work in the BIMARU state which he inherited from Congress should be seen somewhere after all this time. So let’s look at his performance and some flagship schemes- 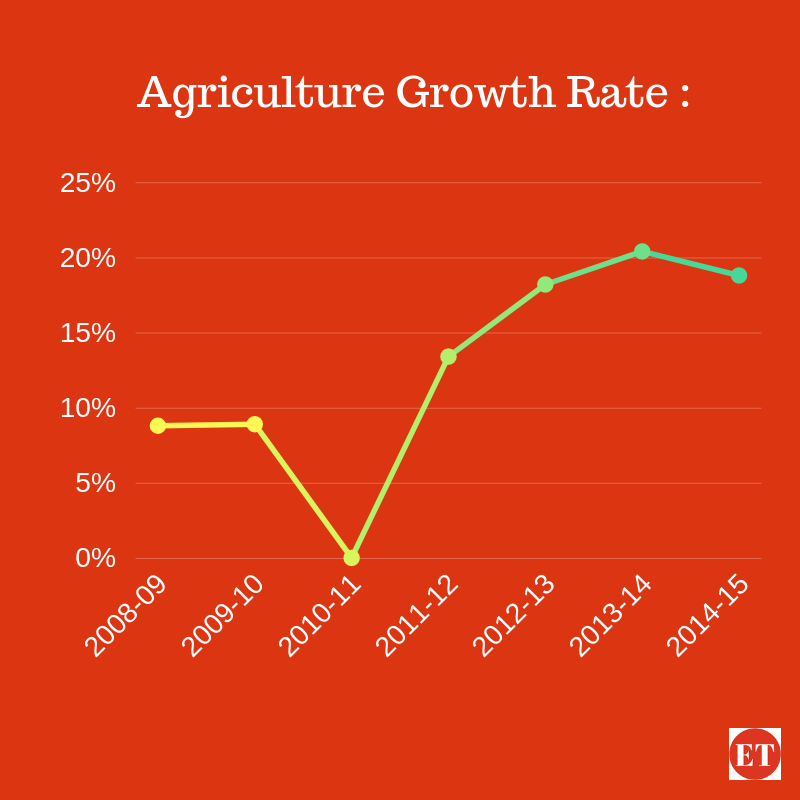 In 2004-05 MP recorded a growth rate of 2.7 in the Agriculture sector, a sector that employed over 70% of the population. In the subsequent years, Madhya Pradesh has seen its agriculture sector grow successfully but with limitation. CM Shivraj Singh second term saw him working on three things “Sadak, Bijli, Pani”. He overhauled the state electricity board and worked on continuance supply of electricity. The farmers benefitted from this as they were promised at least 3 hours of electricity for irrigation purpose every day. Madhya Pradesh in the past 7 years has clocked a growth rate of over 10% in agriculture.

Narmada Canal project which is in the last legs to be completed is another farmer favorite in the area’s it has been implemented. Malwa and parts of Nimar have benefited from it which has resulted in better yields in past 2 years. MP even touched the 20% in the last fiscal year in Agriculture growth rate on the back of these changes.

Still, the farmer distress looms large around Shivraj Singh head. Mandsaur was an outlet of farmers who though now have increased their yield and crops per year are yet to receive proper prices for their crops. In Madhya Pradesh, the long lines of trucks laden with onions outside government storages is a common sight. The reason being farmers not getting their due. Madhya Pradesh like any other state in India is fighting the Sahukari system which eats away a farmer’s income. The middleman in agriculture system means no profit or very minimal one for small farmers.

The Corruption in bureaucracy and political system also hampers the distribution of dues to farmers. Though Aadhar based transfer has at least insured money going to the right person, the delay is still there.

Road infrastructure is another pet project of CM Shivraj Singh Chouhan. His remarks of MP road better than that of US, though very far-fetched have some truth in it. Madhya Pradesh has improved its road infrastructure significantly under his second and third tenure. NH4 which passes across the state has been 4 laned with some parts now under work to have 8-lanes. State highways to have improved all over the state with PM Sadak Yojana too successful in connecting villages to the highway.

Also Read -   Congress manoeuvres to take on BJP like never before

According to government data, around 7000 villages have been connected via all-weather roads under the Mukhyamantri Gram Sadak Yojana scheme. Under the scheme, villages which are not covered under the PM Sadak Yojana are targeted and road connectivity is provided. Until 2016, sanctions for 27820 roads and 11954 bridges/culverts were given. Out of this, 6500 roads stretching 14,000 kilometers were completed. Most of these villages covered under this are Tribal and remote villages with a population very low and terrain very rough. The rural road infrastructure has improved a lot in Madhya Pradesh in comparison to 10 years ago but room for improvement is still there.

For Mamaji of Madhya Pradesh, the Ladli Lakshmi Yojana is a marquee one in the social sector. Implemented in the year 2007, the scheme was focused on reducing the female foeticide cases in the state and also reducing the girl dropouts in school. The Scheme provides an economic incentive for parents and the girl to attend and complete school till 12th. Also, it mandates that girl to be not married before the age of 18 to be eligible for the final payout of lakh rupees. With over 23 lakh beneficiary of the scheme according to MP government data, the scheme is quite popular in the state.

The scheme was recently also praised by PM Modi for bringing a change in the mindset of the society. Haryana and other BJP states are now also trying to replicate the scheme in their states where female foeticide is high resulting in skewed sex ratios.

CM Shivraj Singh Chouhan has also launched the CM Helpline in last 5 years. Toeing the line of citizen charter which is a quite helpful act for people. CM helpline helps in resolving the matter with just a complain. Any person can call to register or file their complaint online on CM helpline website regarding any matter involving MP government and bureaucracy. The helpline has been much appreciated all over the state for its prompt response.

Also Read -   11 Reasons why Ujjwala Yojana could be a game changer in 2019 elections?

CM Shivraj Singh Chouhan has successfully taken a step towards e-governance and good governance through this helping. The helpline works around the citizen charter which has guidelines for each level official to resolve the matter or pass it on to higher office. More importantly, helpline gives the power into the hands of the citizen to close the complaint when satisfied or else automatically assign the next higher official in the hierarchy. For officials, it is a matter of performance review as an unresolved complaint looks bad on them during performance reviews promotions.

CM helpline has registered over seven lakhs complaint with 6.8 lakhs resolved satisfactorily. The concerning part though is that it also means that corruptions run deep in MP political and bureaucratic system. The CM helpline though a great scheme, in reality, it works as a tool for checks over lower levels of bureaucracy that should be there naturally.

A factor that Shivraj Singh Chouhan has failed in is the level of corruption in the bureaucracy and government. VYAPAM exposed the reach of corruption in the state, and it was across party lines. His minister had to resign and so did many bureaucrats. More alarming has been the number of raids IT department has conducted in the state on bureaucrats from lower rungs too high echelons.

Even after 2014 and the Modi regime, MP has noticed many cases of the corrupt official being caught by IT department. The corruption charges are one of the most potent ones that opposition carry in this upcoming election. With Rafael deal being used to target Centre, VYAPAM and other cases will be used to target the state government.

Madhya Pradesh Elections: Why BJP and Amit Shah should be worried?

Will Congress be able to achieve its breakthrough in 2019 election?