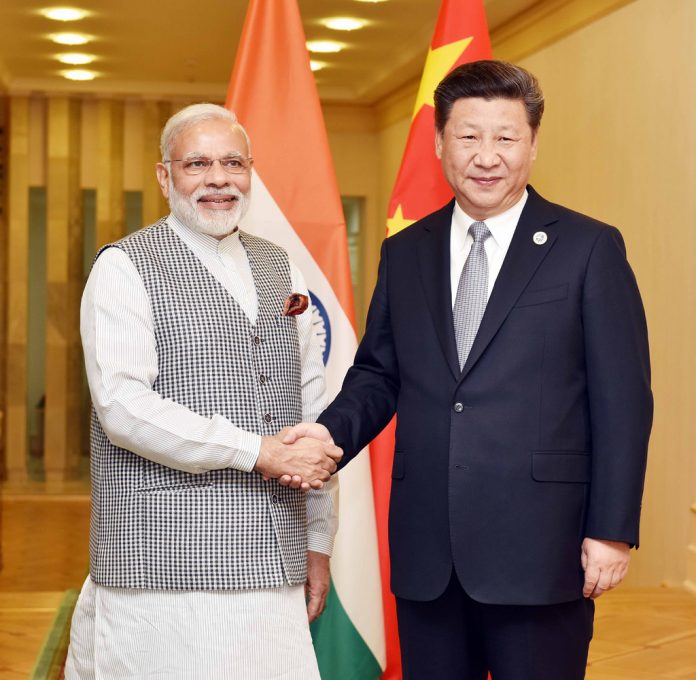 India has been at a geographically advantageous spot, which has allowed it to grow on its own, while also maintaining contact with the outside world. India has been lucky enough to have oceanic coasts that gave rise port towns that connected it to the rest of the world, without being disadvantaged by the isolation that an island would bring. Historically, geography has been favourable to India– the Himalayas have shielded India from invasions from Chinese empires, open borders at the northwest have allowed for trade with Persia, and the vast coasts of the south have fostered trade with Europe and the rest of the world. However, times and borders have changed, so these geographical boundaries do not mean the same things for India today. The northwest border is no longer a highway to Persia, but a high-tension zone with the slightest of provocations having the potential to start a nuclear war. The Himalayas always bred a history of noncontact with China, but the side-by-side existence of two economically strong, nuclear-armed powers has led to tensions escalating to border standoffs even in the hostile Himalayan climate. Relations with neighbours now go beyond geography and require a more in-depth understanding of political histories. This article explores the stories of India’s relations with its three strategically most important neighbours: China, Pakistan, and Myanmar.

India and China, though being neighbours, have been culturally isolated from one another for most of history as the Himalayan ranges were nearly impenetrable. This has led the two countries to go through technological and cultural developments independently, without much contact. However, after independence and partition in 1947, Prime Minister Nehru found it important to establish positive relations with India’s neighbours so India could enjoy some amount of border security as a newly formed nation. In 1950, India became the first non-Soviet bloc country to establish diplomatic relations with China. The leaders of the two nations met multiple times and seemed to have good personal relations, but the ostensible friendship came crumbling down in 1962 when Chinese forces invaded Arunachal Pradesh’s disputed Aksai Chin region. The war was economically taxing on India, being a newly independent country with a struggling economy. The war left diplomatic inactivity as leaders of both nations did not engage in any discourse for decades. PM Rajiv Gandhi ended this by visiting China in 1988, the first PM to do so since Nehru in 1954. He had in-depth talks about the border dispute, signed bilateral agreements, and reiterated that Tibet was an autonomous region of China. This visit was important to pacify the tensions that were building up. Since then, both sides have sent and entertained various diplomatic missions to foster good relations, but tensions have escalated.

Reconciliation efforts today would have to span vast topics of disagreement. The military standoff in Doklam (claimed by both China and India’s ally Bhutan) in 2017 is the most recent, most pressing issue threatening the security of India’s borders. China also supports Pakistan’s military actions by sending billions of dollars in aid, and by openly internationally opposing India’s efforts to blacklist Jaish-e-Mohammad terrorist Masood Azhar as an international terrorist. India frequently accuses Pakistan of harbouring terrorist groups, and China’s active opposition to India’s fervent efforts against terrorism is a major irritant to Sino-Indian relations. China has also used its UN veto powers to prevent India from acquiring permanent member status in the UN Security Council. China’s military presence in the Indian ocean despite not having an Indian ocean coast does not point to peaceful relations either.

In April 2018, PM Modi and Chinese President Xi Jinping held informal talks in Wuhan, which does point to improved relations. The two leaders held talks without aides or agendas, to discuss their differences. PM Modi raised expectations by expressing his hope that such informal summits become a regular affair. The two leaders seemed hopeful of a better future, but China will continue to act as a diplomatic irritant for India until border skirmishes end, and China supports India on the world political stage.

Also Read -   Why is Modi center of Pakistan elections 2018?

India and Pakistan’s relationship has been turbulent, to say the least. The creation of Pakistan as a nation itself came somewhat out of the blue, and many describe the partition in 1947 as the Indian Holocaust due to the million-odd lives that it claimed, apart from displacing around ten million others. Apart from the communal violence ensued, a new issue faced the two countries: Kashmir. Since the partition line was based on religion, and the Kashmir region had a Hindu ruler but mostly Muslim population, both countries claimed Kashmir for themselves. Even though the ruler of Kashmir signed the Instrument of Accession to make Kashmir a part of India, both countries’ militaries fought over it till January 1949. The UN brokered a ceasefire line, but both countries still referred to the other side of the line as “occupied” territory. The Kashmir issue continued to be a point to contention between the two nations, and it still is to this day. There is still widespread lawlessness and violence in the area, and militaries of both nations and terrorist groups continue to wreak havoc on the region.

In 1965, India and Pakistan went to war again. The dispute began with skirmishes in the Rann of Kutch region in Gujarat, but escalated into a war when Pakistani troops invaded Jammu and Kashmir in August of that year. Having just fought a war merely three years ago with China, this war was very difficult for India. The war ended in September 1965, with a UN-mandated ceasefire. The following year, the Soviet Premier Alexei Kosygin invited Indian PM Shastri and Pakistani President Ayub Khan to Tashkent (in Uzbek USSR, presently in Uzbekistan) to hold a talk on the issue and bring the bloodshed to a close. The two leaders signed an agreement to retreat their troops to their positions before the war, but Shastri died under “mysterious circumstances” immediately after signing the agreement, before he could even make it back to India. The Indian government has refused to declassify documents explaining his death citing potentiality of further strained foreign relations. Many in India suspect conspiracy by Pakistan, but we cannot know for sure. In 1971, India went to war against Pakistan yet again, this time backing Bangladesh’s freedom movement. Pakistan surrendered after 13 days of war, and Pakistan perceived the war as India meddling in their internal affairs. In the 1970s, both India and Pakistan acquired nuclear powers with assistance from USSR and US respectively, and the border between the two became yet another proxy-battlefield of the Cold War. This raised the stakes of potential conflict that the two countries may have in the future.

The Kashmir dispute continued to resurface time and again, but in 1999, PM Vajpayee signed the Lahore Declaration with Pakistani PM Nawaz Sharif, agreeing to undertake ‘Confidence Building Measures’. However, the peace that this act of diplomacy brought was very short-lived as the Kargil conflict escalated into a war, and there was heavy loss of life on both sides. The Kargil war ended in a ceasefire, but the region was still heavily militarised and there were multiple instances of conflict, many with loss of life.

In 2015, PM Modi visited Lahore, the first Indian leader to visit Pakistan since 2004. The leaders discussed various points of difference between the two countries, including Kashmir, according to Pakistani Foreign Secretary Aizaz Chaudhry. In 2016, after repeated ceasefire violations by Pakistani forces, the Indian military launched a surgical strike and inflicted “significant casualties” on terrorist camps across the border. These were obviously not well received by Pakistan, who claimed civilians were harmed in this surgical strike but there is no way we can know, since details of the surgical strikes are still classified. In 2018, Imran Khan replaced Nawaz Sharif as Prime Minister. The new Prime Minister of Pakistan has expressed his will to mend relations with India and resolve the Kashmir issue through diplomatic talks. As a centrist party leader, we can expect some diplomatic achievements under his reign. There is generally a lack of dialogue between Indian and Pakistani leaders, and PM Modi broke a long diplomatic silence with his 2015 visit to Lahore, but violence still continues in Kashmir, and the two countries are still at odds with each other on almost every issue. Given the bloody history of the partition that is etched in the collective memories of both nations, a full reconciliation is unlikely, but there is potential to end deaths on both sides through diplomatic talks. It is upon whoever is elected in 2019 to seriously take up talks with Pakistan with the new Prime Minister.

Myanmar is a relatively small country, in terms of size, economy, and military threat it poses, but is an important neighbour for India for India to maintain positive relations with. Myanmar is India’s gateway to trade with Southeast Asia, which has been big on PM Modi’s agenda of “Look East”. Insurgency in the Northeast can be quelled with Myanmar’s help. It is also important that India maintains a diplomatic proximity to Myanmar so it does not ally with China and add to India’s border woes.

Myanmar is the only ASEAN member India shares a border with, so access to Myanmar means access to the ASEAN market. ASEAN nations collectively have the highest GDP growth rates in the world, so access to their markets would mean huge growth for India as well. However, there are a number of roadblocks to this free market utopia. For one, Myanmar lacks the infrastructure to facilitate such large-scale trade between India and ASEAN. Diplomatically too, India and Myanmar are not the best of friends. Myanmar’s government faces criticism from the rest of the world for the ethnic cleansing in the Rakhine region, of which the Rohingya community has been victimised. India’s plan to deport 40,000 Rohingya refugees was not well received by Myanmar.

Despite differences, it does seem as though the two countries have maintained a functional relationship over the years. In 1951, the two countries signed a Treaty of Friendship. Then in 1987, PM Rajiv Gandhi visited Myanmar to establish good relations between the two governments, and since then, there have been regular diplomatic visits undertaken by officials of both countries. After Cyclone Nargis hit Myanmar in 2008, India offered $1 million in aid. India has undertaken a number of infrastructure projects in Myanmar and set up industrial training centres in various cities. Bilateral trade has expanded significantly from US$ 12.4 million in 1980-81 to US$ 1070.88 million in 2010-11. It will take a little more diplomacy and development before Myanmar turns into the trade hotbed India can benefit from. PM Modi visited Myanmar in 2017, and India’s foreign minister, deputy national security adviser and foreign secretary have all separately visited Myanmar in 2018. Myanmar leader Aung San Suu Kyi was one of the chief guests at India’s 2018 Republic Day parade. With growing Chinese influence on Myanmar, it is important India keeps Myanmar close, and the Modi government has done right by frequently sending diplomats for this purpose.

Will Wuhan summit be a breakthrough in Indo-China relations?

Here are the key takeaways of Modi-Xi Jinping Meeting at Wuhan...