2018 assembly elections could be called as the semi-final of 2019 elections. After the Karnataka election in which BJP could not form the government despite getting the maximum number of seats, Madhya Pradesh, Rajasthan, and Chhattisgarh elections are very crucial for BJP. As per Latest ABP-CVoter Survey, BJP to lose elections in Rajasthan, MP & Chhattisgarh. If Congress makes a comeback in Madhya Pradesh, it might add some numbers for Congress in the upcoming 2019 elections. Participate in our Madhya Pradesh Opinion poll 2018 and let us know which party do you think will win MP Assembly election 2018. 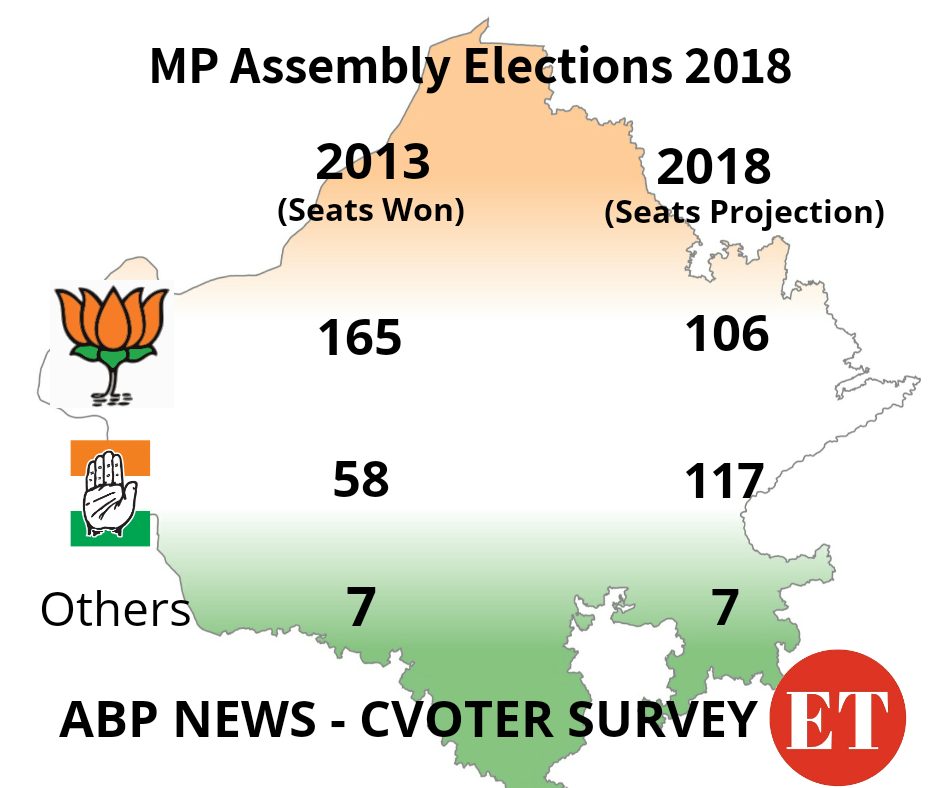 Before that, times now opinion poll Madhya Pradesh 2018 had predicted that the magic of Shivraj Singh Chauhan will be intact in Madhyapradesh. This Madhya Pradesh election 2018 opinion poll had given 153 seats to BJP, 51 to BJP and 13 seats to BSP. If we believe on these numbers than we can say, anti-incumbency is not going to play a role in Madhya Pradesh Elections. This survey was done between 15th March to 20th April. A total of 42,250 voters participated in this times now survey.

However, if we go by Madhya Pradesh civic polls results, anti-incumbency played a crucial role and may jeopardise the dreams of BJP of forming the government in Madhya Pradesh. Both BJP and Congress won 9 seats each in the civic polls. Not to mention, how wide this gap was 14 years back when Shivraj came into power. Slowly Congress has been able to fill the gap and become a challenge for BJP in next MP polls.

The tenure of the Madhya Pradesh government ends on 7th January 2019, the elections will be held in November 2018.

This year in bye-poll MP elections 2018 held in Mungaoli and Kolaras Assembly seats, Congress won by a huge margin. In Mungaoli, Congress’s Brijendra Singh Yadav defeated BJP’s Bai Sahib by the margin of 2,124 votes, while in Kolaras, Congress was declared the winner by a majority of 80,000 votes. This will surely give Congress a boost before going for a poll in the state.

The election will be held for 230 seats. In the last assembly elections in 2013, Bharatiya Janata Party won a total of 165 seats while Congress could manage to win only 57 seats and BSP won 4 seats.