2019 Lok Sabha Elections are barely weeks away now. The entire political machinery of the country is up and running in preparation for the elections. We’re in that period before the elections when the opposition’s allegations and the actions of the government during its tenure, are comprehensively scrutinized, starting with PM Modi’s own constituency, Varanasi. Narendra Modi’s work as MP of Varanasi is of much interest to everyone for two reasons. Firstly, it is the Prime Minister’s constituency. Secondly, PM Modi’s work as Varanasi MP has set a precedent for all the parliamentarians to follow.

Narendra Modi contested the 2014 elections from 2 constituencies, Vadodara and Varanasi. He won in both Constituencies. In Varanasi, he defeated AAP leader Arvind Kejriwal by a margin of 3, 71,784 votes.  He defeated Congress leader Madhusudan Mistry in Vadodara by 5, 70,128 votes.  Since an MP cannot represent more than 1 constituency, he vacated the Vadodara seat.

During a visit to this city, before the 2014 elections, PM Modi called Varanasi as the cradle of India’s glorious culture, a confluence of tradition, history, culture and harmony. PM Modi envisions Varanasi as a blend of the Ancient and spiritual ethos that it possesses coupled with state of art tourism and infrastructural facilities. He wishes to make the city a world heritage site. Special emphasis has also been promised towards cleanliness under the Swachh Bharat Mission. Narendra Modi first visited Varanasi after being elected as MP in November. During his two-day visit to the city, he stayed at Diesel Locomotive Works (DLW). He visited the banks of Ganga at Assi Ghat where he initiated Ganga Drive as he participated in Shramdaan to remove dirt from the banks of the river. He then nominated 9 people to carry out the cleanliness drive where he was assured that the Ghat would be cleaned in a month.

To inspect whether the drive has been well implemented, he visited the ghat again before the end of the year.

In December, he launched the Madan Mohan Malviya National Mission on Teachers and Teaching at Banaras Hindu University, Varanasi. “Good Education”, PM said on the occasion, is in demand across the globe. Teachers are thus required to impart this quality education and this mission is a step in that direction. Through this, teachers will be trained and nurtured conforming to global standards of teaching.

PM Modi launched this initiative to boost tourism. He called upon schools and educational institutions of Varanasi to develop expertise in various aspects of Varanasi`s rich culture, which would help them contribute towards drawing the attention of tourists visiting Varanasi. PM Modi said tourists would come to Varanasi, because of its ancient heritage, but would stay only if the people of Varanasi made the effort to showcase that heritage. He also gave prizes to six craftsmen under Yukti Initiative. 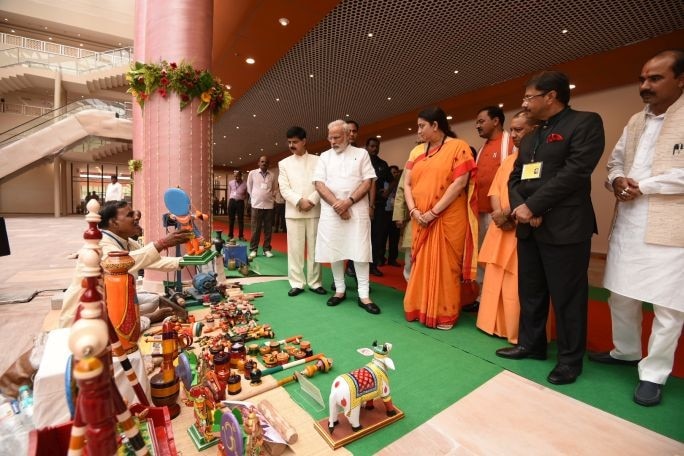 In 2017, The Prime Minister dedicated to the nation, the Deendayal Hastkala Sankul – a trade facilitation centre for handicrafts – at Bada Lalpur. He described the Trade Facilitation Centre as one of the biggest projects for Varanasi for a long time. He said this Centre would help the artisans and weavers showcase their skills to the world, and facilitate a brighter future for them.

PM Modi addressed a gathering at the commencement of expansion of Diesel Locomotive Works where he stated the importance of the Indian Railways and how it is the backbone of the Indian Economy. He flagged off a new high horsepower diesel locomotive, developed indigenously. He cited how this was an example of Make in India. PM Modi also stated that 4 Railway Universities will be established to ensure proper and well trained human resources for the railways. The cleanliness drive of Varanasi’s Ghats picked up pace under the Swachh Bharat Mission and the Namami Gange Project in 2015. Many volunteers, particularly the youth, took to Ganga’s Ghats and Varanasi’s streets to make the city cleaner and greener than ever before. A total of 86 ghats were cleaned making it the biggest cleanliness campaign ever. A team of 160 members also flew in from Surat taking out cleanliness drives across the entire city. SBI, ICAI, and several NGOs also joined the drive. These combined efforts were lauded by PM Modi and the BJP high command.

In 2018, PM Modi said that the Namami Gange project to clean the Ganges had reached a new milestone. Projects worth Rs 23,000 crore have been approved while work on projects worth Rs 5,000 crore was in progress.

In July 2015, the Ministry of Power, under the Nationwide initiative of promoting LED-based efficient lighting, decided to replace all conventional lights in 84 Ghats of Varanasi with LED lights. Objectives were to enhance illumination of the Ghats, reduce energy consumption and spread awareness amongst general public on the use of efficient LED lights. The project was set a deadline of 3 months; however, all the ghats were illuminated in just less than 1 month. A study conducted by Energy Efficiency Services Limited (EESL) shows that with incandescent lamps being replaced with LEDs, the cost would be reduced by over 70 per cent. About 1.21 million units of energy would be saved every year. Putting up the LED lights have brought down the annual energy consumption to 0.47 million units from 1.68 million units. This step further reduced the annual energy bill radically by about 30 per cent providing a monetary benefit of Rs. 1.25 crore (approx.) per year.

In September 2015, PM Modi visited Kashi and launched a unique financial inclusion initiative. Under that, he distributed a package to 602 families under Pradhan Mantri Jan Dhan Yojana. He also distributed 501 paddle rickshaws and 101 e-rickshaws. Furthermore, he distributed 1000 solar lanterns to rickshaw pullers and vendors. A year later he also launched e-boats to enhance tourism of Kashi.

Various institutions like SIDBI, IDBI Bank, UCO bank are party to this initiative. PM Modi said that this was a step to combat poverty and an effort to improve the socio-economic conditions of the people of Varanasi.

Along with this, Construction and widening of the main roads connecting Varanasi are being carried with an expense of Rs. 8014.57 Crores. Out of this amount, Rs. 7000 Crores is being spent on the widening of national highways connecting Varanasi to Sultanpur, Azamgarh, Gorakhpur, Aurangabad and other nearby cities which includes many new flyovers, bridges and bypasses to be constructed.

The cabinet in 2017 approved the expansion of Handia-Varanasi section of NH-2. Development of waterway is also being done alongside the roadways in Varanasi, which is planned with an expenditure of Rs. 381 crores. In phase-1, 1380 Km long waterway is being developed from Haldia to Varanasi. He inaugurated the inland waterways terminal built at a cost of more than 200 crores in Varanasi last year.

The air services and facilities for travellers have also been improved at Babatpur airport. Additional check-in counters have been set-up and additional boarding gates have been created here. Direct flights from Varanasi to Hyderabad, Bhubaneswar and Bangalore have started operating. The Airport is being expanded to facilitate take-off of bigger aircraft from here.

PM Modi has also launched the Integrated Power Development Scheme in Varanasi and laid the foundation stones of Chowk and Kajjatpur substations. The slew of infrastructure projects has given a great boost to the city.

While a spree of infrastructure initiatives have been undertaken in Varanasi under PM Modi, a fly-over collapse in May last year put a dent on his image in the constituency. Over 20 were killed and more than 2 dozens injured when a portion of a state-run corporation owned fly-over collapsed. PM Modi approved an ex- gratia of Rs. 2 lakh each from Prime Minister’s National Relief Fund for the next of kin of those who have lost their lives. An additional 50,000 were granted to those who were injured.

Narendra Modi’s election as Varanasi MP has brought the city into the global limelight. Bhutan, Nepal, Australia, America have all signed pacts or deals associated with the development of Benaras. However, Japan has given the maximum attention to this ancient city.

Also Read -   Why the bubble of Fake news must be burst?

In August 2014, PM Modi visited Kyoto with an intent to establish relations of Varanasi with the Japanese city. An agreement was signed between the two countries aimed at the preservation of monuments and the development of modern urban amenities in Varanasi on the lines of Kyoto after Prime Minister’s visit to Japan. For the transformation of Varanasi as Smart City, Japan would provide assistance for sanitation, public transport, power supply and infrastructure. Deputy Mayor of Kyoto, Kenichi Ogaswara had already paid a visit to Varanasi in this regard. Japanese Prime Minister, Shinzo Abe has also assured Prime Minister Narendra Modi to lend full support on this. Also, Japan International Corporation (JIC) has given an aid of Rs. 496.90 crore for cleaning of River Ganga.

During Abe’s India visit in 2015, both leaders visited the Ghats of Ganga and attended the evening Arti.

Numerous initiatives to enhance the health sector of Varanasi have been undertaken by PM Modi. He dedicated a 334-bed trauma centre in Banaras Hindu University. The trauma centre, built with a corpus of Rs. 146.60 crore, would provide round the clock free checkups and treatments for patients. The per-bed grant for 334 beds of trauma centre has been increased from Rs. 1 lakh to Rs. 2 lakh. Also, Rs. 103 crore has been dedicated towards telemedicine.

PM Modi has laid the foundation stone of Madan Mohan Malviya cancer centre and the Centenary Super Specialty Complex. The 250-beds centres have been allocated 580 crores and 200 crores respectively. Beds have also been increased from 1200 to 1500 and from 60 to 150 in Sir Sunderlal Hospital and ESI Pandeypur Hospital respectively.

More than 1200 crores have been spent on providing healthcare facilities to the people of this region till now. During his September 2018 visit, PM Modi met Anganwadi and ASHA workers and announced an increase in remuneration for them. He also visited a few schools to interact with young school children. Later, he held a road show in the evening where he inspected the development works undertaken in the city with a surprise visit to the Manduadih Railway Station.

He again visited in November inaugurating several projects, most important of which was the inauguration of the 140 MLD Dinapur STP towards the efforts of cleaning the Ganga. He also said that through their efforts, the villages along the banks of Ganga have been declared Open-Defecation free. Rural Sanitation, he said in a speech, has risen to 95%.

PM Modi’s work as Varanasi MP is for everyone to see. People visiting Varanasi have talked well about how the face of the city has been completely changed in a matter of time. Even some opposition leaders are in awe of PM Modi’s efforts in Benaras. He’ll contest again from this holy city and given the love and admiration he has received from the people here, Varanasi will surely be Narendra Modi’s constituency again.